Wilmington: A World Turned Upside Down

There's an old myth that, as he ordered the flag brought down and the post at Yorktown surrendered, General Cornwallis ordered his fife and drum corps to play The World Turned Upside Down a traditional British Christmas song written in protest of the aristocracy outlawing raucous celebration. In its lyrics, the paupers are made kings and the kings made paupers. The song was more than likely not played during the surrender. But myths are often potent and always telling.

I've been thinking of that tune lately. And I've been thinking of Wilmington, North Carolina. The number of times I've watched (and listened to) Spielberg's Lincoln is now up into the teens. Each run through I'm noticing more and more. I'm now to that stage where you mouth lines along with Mr. Slade and anticipate the coming scenes viscerally.  And the carnage at Wilmington sits central to that film; it's a lynchpin of the plot that embeds itself deeper each time I watch.

Wilmington's also been on my mind because I've made two trips down in as many weeks to see my parents in their new adopted city.

Back in November, when I visited for Thanksgiving, we took a trip over to Fort Fisher. It was an odd site, an odd tour and an interesting experience. We wandered the site with a state park ranger, who was quite folksy and nice. We ended up talking more about Gettysburg than Fort Fisher (the curse of mentioning you're from Gettysburg is that every Civil War person wants to talk about your home rather than theirs), but I picked up enough of the vibe of the place to understand. 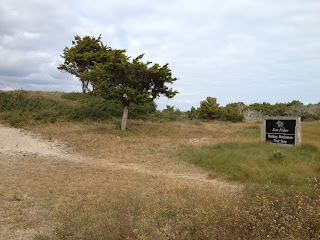 Before we left, I told my Dad we needed to visit Battery Buchanan. It was the final fallback position of the retreating rebel forces. It's where the battle at Fort Fisher ended. It's where the world turned upside down.

Dad stayed in the car; rain was beginning to fall. Mom stayed at the wayside; the remains of Battery Buchanan were too steep for her. But I needed to climb it. It's a simple mound of sand. But it was deeply powerful climbing up the dune.

At the top, I looked out. The words of Chaplain Henry Turner still rang in my mind from the fort's museum exhibit: "Indeed, the white troops told the rebels that if they did not surrender they would let the negroes loose on them." The white rebels cowered behind the Battery as the blue soldiers swept in toward them. Behind the sand dune hid a world which was dying. On the other side stood triumphant a world turned upside down.

The rebels from Fort Fisher surrendered to a federal column led by the 27th United States Colored Troops. They were black. Just a few years before, they weren't citizens in the eyes of the law. Now they were soldiers. And they were men.


And if cats should be chased
Into holes by the mouse,
If the mammas sold their babies
To the Gypsies for half a crown,
If summer were spring,
And the other way 'round,
Then all the world would be upside down.
Posted by John Rudy at 12:30 AM