On the Battleground at Gettysburg: A Journey to Remember 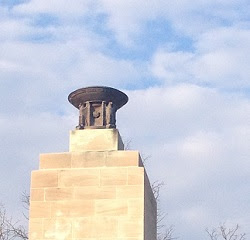 I was very pleased to be one of the two speakers at Sunday night's inaugural "Journey to Remember" event sponsored by Gettysburg College. A group of students and community members trekked up the hill from the campus, resting on Oak Hill at the base of the Eternal Light Peace Memorial to hear myself and Janet Riggs, the college's President and a fellow alum. The student organizers asked me to place that place into historical context.

So I did. In about 10 minutes, I tried to bring that ground back to life with the fascinating tales of when students acted.

Rather than let the words die in the aether, I wanted to preserve them. So I share them with you, many of you who couldn't make it out to Oak Hill on Sunday night for the paramount event of the final event of Founder's Day weekend. Maybe they'll help bring that place to life in a new way for you too.

Pennsylvania College: Imperfect Peace
In the early fall months of 1925, planning was underway in houses all across the town. A celebration was in the works. Gettysburg’s Jewish community was readying to celebrate the high holy days. Rosh Hashanah is a time of celebration, a time to blow the shofar and gather with family for a meal of sweet apples and honey.

Others in Gettysburg were planning for another gathering on the weekend of September 18th, 19th and 20th. Bunting was being hung, flags were being put outside of homes and shops. The town was infested with a carnival atmosphere, welcoming guests from across the state.

Rosh Hashanah weekend aligned with the Pennsylvania Ku Klux Klan Reunion in Gettysburg. Friday night, as Jewish shop owners locked up their stores and turned to go home to their families to celebrate the happiest of New Year’s, Model-T Fords streamed through the streets of town, white hoods peaking from their convertible tops, paint on the sides reading “Klan to Gettysburg.”

They gathered right here, in these open fields where just over 60 years before Confederates had made charge after charge forward to strike a blow for a new nation, a revolution to protect white supremacy. Now the Klan was gathering once again, trying again to strike a blow for white supremacy. This time, though, they had a parade instead of a battle.

Through the streets of town, the men in hoods marched. Some of them were dressed as colonial soldiers, carrying signs reading “Spirit of 1776.” Others were dressed like soldiers from World War I, less than a decade past. Another group carried, taught across the street, an American flag. And the people on the sidelines, the spectators and townsfolk and visitors, dug deep into their pockets for dollar coins and tossed them in the air to be caught in this American flag.

While the Gettysburg Times published a special Ku Klux Klan edition, some students of the college used their own publication, The Blister, to speak out against the fraternal order. “Unless cultural educative processes are set in motion concerning the work, make-up, practices and theory of the hooded order, itself repugnant to the idea of Democracy, America will suffer,” the students announced. “Anyone having the least spirit of America,” the students chided, “anyone who reveres the grave of the ‘Unknown Soldier’ who represents the ‘full measure of devotion’ for the national emblem, anyone who can stand by the avenue of Klan parades and watch docilely the stars and stripes used as a promiscuous coffer to catch coins… and can remain unmoved belongs to a land where national respect and self-respect are a grotesque hallucination.”

That, “full measure of devotion,” that the students spoke of, that sacred death of man for nation, happened right here in these fields. Those words, joyfully stolen from Lincoln, were first heard by, among others, students from our college.
Lincoln chose Gettysburg as the place to link these dead of the civil War, these men who loved and felt, hated and sorrowed, laughed and dreaded, to a larger goal. In a little under 300 words, he made this place about extending freedoms to ever increasing groups of men. Dead men littered the ground where Pennsylvania College students had captured butterflies just a year before. The war quite literally came to our college campus. And as students stood listening in 1863, Lincoln's words made that war change.

The war changed on our campus, the nation bent in our midst. Martin Luther King Jr. once said that, “the arc of the moral universe is long, but it bends toward justice.” One of the places that we can see that bend is here. Ten-thousand men died in the fields in which we run and play, in which we meditate and read. A battlefield seems a terrible place, sometimes, to even begin to contemplate peace.

But this landscape can be a place of peace in its vivid depiction of the breach. On the morning of July 1st, 1863, a 15 year-old student of the College’s preparatory division woke to find a war going on just over the ridge from his school. His father was away in the army, and now Frederick Lehmann wanted his chance at joining history. So he wandered off the campus. On the way, he found a wounded soldier and plucked his musket from his shoulder. He found another who didn’t need his cartridge box any longer. As he wandered toward the sound of the cannons, cannons booming right down this ridge, within our sight, he transformed himself from a student to a quasi-soldier and began firing away at the enemy.

Frederick was captured in the heat of battle, in the midst of making war. He nearly suffered the consequences. A rebel officer was ready to treat him like any other prisoner. But the stakes were even higher. Frederick was a civilian, he was a simple young man like any of you. Picking up a gun, he began to blur the line between army and citizen. If some enterprising Southern officer had felt vindictive, upon finding Frederick, he would have had every right to burn the town to the ground as a hive of insurgency.

They didn’t. Frederick Lehmann was let go instead. A Federal officer plead for Frederick’s release, and he was placed in the care of one of the College’s professors for the rest of the battle. On July 3rd, as the last shots of Pickett’s Charge were echoing away, Fredrick’s curiosity got the better of him. He wandered into the street, where a rebel sharpshooter found him and drilled a hole through his leg with a bullet. Frederick Lehmann walked the rest of his life with a limp, a constant reminder of what war does.

And we are immensely lucky here. We don’t need a bullet hole in our leg as our reminder. This place is a reminder to us, surrounding and enveloping us. For some of us, it’s only 4 years that we experience this horror and sorrow. For others, we are doomed to live in the midst of war’s fruits for our lives, drawn by its tale like a siren song.

But before you leave this place, if you have the luxury after your 4-years’ time to leave this place, wander these fields. Meet the men who fought and bled here. Meet the men and women who suffered through months of horror nursing men back to health or consigning them to their graves. They are still wandering this field like ghosts. And every so often, we see their echoes. Sometimes they come as phantoms in our imaginations as we try desperately to imagine the horror of war. Sometimes they are white-sheeted denizens of hatred marching through our very streets and defiling our sacred flag. Sometimes they are the images of bleeding women and men and children on our televisions as we peer across the oceans into another more modern war-zone.