Tool of Revolution, Piece of the True Cross

One of my former students, brilliant researcher and Gettysburg College Senior Lauren Roedner has been pulling together an exhibit from the private collection of Angelo Scarlato, displayed in the display cases in Gettysburg College's Special Collections. The exhibit, Slaves, Soldiers, Citizens: African American Artifacts of the Civil War Era opens officially on Monday. But I was able to sneak a quick peak on Wednesday night of the exhibit-in-progress.

There are some amazing artifacts, from freedom papers to slave collars, which pluck at the very heart of the 19th century's driving institution and struggle.

But one in particular caught my eye on Wednesday night. It is a rifle musket, like any other used in that war to preserve the United States. Carved in the stock are the initials, "I.J.W." and a unit, "CO. F 43." But the inscription doesn't have a state. 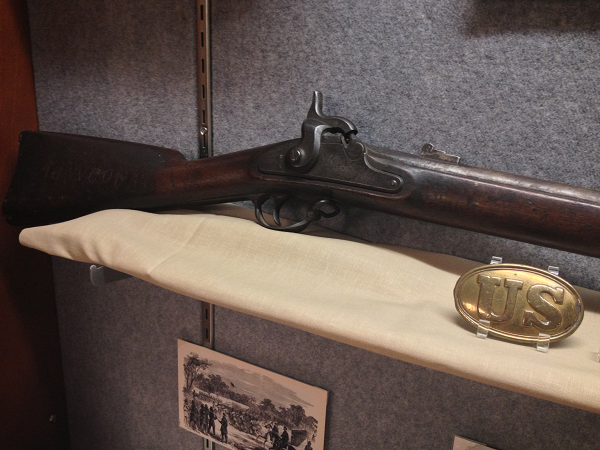 The gun was carried by Isaac J. Winters as he marched through Virginia during the war with the 43rd United States Colored Troops. Winters was a native Pennsylvanian, a free farm laborer from the outskirts of Philadelphia. As the war began, the 32-year-old man had a wife Margaret and two children, a daughter named Eliza and an infant son named Charles. As the war progressed, Winters' fledgling family continued to grow; his wife Margaret was pregnant with a girl as the calendar turned over from 1862 to 1863.

That flip of the calendar was important for all of America too. The war which the nation had been mired in for nearly two years was transforming. America began fighting, quite literally overnight, for a new goal: the freedom of 4 million held in bondage in the South. The Emancipation Proclamation opened the floodgates of freedom, transforming the war's aim. It also opened the United States military for men of a darker hue. They could start becoming real citizens.

Isaac Winters found himself, like many other citizens, caught in the new concept of conscription. He was drafted and subsequently mustered into the 43rd USCT in the late summer of 1863. The 5 foot, 9 inch tall black man was suited in a uniform and issued a weapon to fight on behalf of his nation, the new-found freedom of the citizen and, for Winters, the new-found obligation as well. He left Margaret and three children behind, his newborn daughter Anna cradled in the arms of his wife. And he fought.

The 43rd plunged through Virginia, part of a new American revolution. These were black men marching to tear men, women and children who looked just like them from the grip of slavery. According to an account from one member of Winters' unit, as they marched through Virginia, the 43rd was, "instrumental in liberating some five hundred of our sisters and brothers from the accursed yoke of human bondage." As the men crossed the Virginia countryside, the soldiers could, "see them coming in every direction, some in carts, some on their masters’ horses, and great numbers on foot." The slaves saw black faces and black hands carrying the tools of revolution and freedom, and said the sight, "seemed to them like heaven, so greatly did they realize the difference between slavery and freedom."

Winters carried that gun, that sainted relic, while he and his comrades freed their fellow human beings. He marched with it at his side while the roadsides teemed with the newly joyous, newly hopeful, newly free men and women of Virginia. 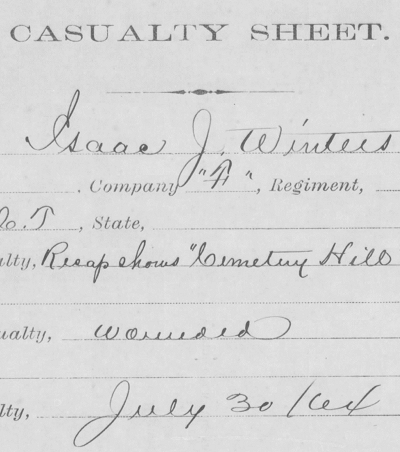 And he carried it on July 30th, 1864 as well, as the 43rd USCT watched a cloud mushroom from the rebel lines as a mine exploded beneath their feet. And into the maelstrom of the Battle of the Crater, Winters and the 43rd USCT plunged. As the battle progressed, Winters was wounded. He would spend months in the hospital before returning to his unit late that fall. He made it home safely to Margaret, Eliza, Charles and Anna by the fall of 1865.

But that gun is not simply a relic of Isaac J. Winters; it is a relic of a revolution. That weapon freed slaves. It is not a metaphorical object, though it certainly is that as well. It is a true relic, a piece of the true cross in the sacrificial struggle to bring freedom to the slave.

And for now, at least for the next few months, you can visit Gettysburg College and pay Isaac J. Winters' gun its proper homage. You can kneel at this small shrine to freedom and thank Winters for taking a step forward on that road toward equality which we're still walking today.
Posted by John Rudy at 12:30 AM