We're Not Important: Historian in an Operating Room

Sometimes, historians (both public and academic) seem to have this oddly overblown sense of self-worth. I'll admit that I'm prone to this every so often. I'm wont to note that historic sites are temples of democracy, that interpreters ultimately are in the business of creating citizens and saving America and that in defining the past we find the present and chart the course for the future.

I believe all those things fully.

And yet I know that in the grand scheme of things, historians are not the most important functionaries in everyday society. We are cogs in a social wheel. We are chroniclers of that which has happened. We enrich lives, but those lives would continues sans enrichment. We pluck the strings of hearts, but those hearts would go on beating sans plucking.

If every historian, public and academic, disappeared in a flash tomorrow like a weird episode of Life After People, the rest of society would barely notice. No planes would plummet from the sky. No one would find their banks unguarded and unattended. No one would die on the operating table.

In short, what we do doesn't immediately matter in the realm of modern society.

I realize this in my day-to-day life quite often. I work for the Federal Government in my day job, and for a private highly-selective liberal arts college in my night. By day, I am a professional public philosopher, paid, in essence, to think. By night, I am a professional private philosopher, again paid, in essence, to think. The thinking I do is skilled labor in the fact that I have developed a mental acuity toward thinking within certain parameters (and breaking outside of them a healthy amount of time). But thinking is technically a form of unskilled work. Anyone can think.

It's one of the beautiful concepts that has been with us since Carl Becker spouted it in 1931: "Everyman His Own Historian." Anyone can delve into the philosophical world of history. Everyone has the proper skills, because largely there are no special skills.

But sometimes we overestimate ourselves. We denigrate the democratization of the historical craft. We liken ourselves to the true skilled craftsmen of the 21st century, perhaps the cardiac or neurosurgeon, and our craft to the intricate work of their hands.

If we let Everyman enter our trade and try their hand at history, there is no true damage done. It is nothing like throwing open the doors of an operating room and allowing the Average Joe off the street a turn with the scalpel. We flatter ourselves to think our lot in life that important. 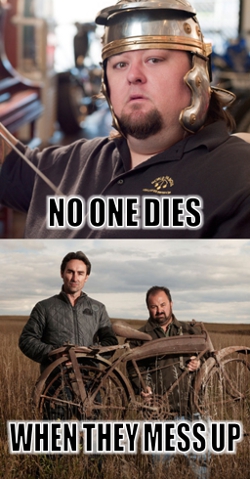 When those real heroes and real craftsmen of the health profession make a mistake, oftentimes, someone suffers true, immediate and everlasting consequences. It's why we train them so long, we treat them so kindly and pay them so well: society places lives (sometimes our very own) in their hands.

No one dies when citizens undertake history. There. I said it. Slipping with history's scalpel doesn't kill anyone. The Pawn Stars aren't in charge of making sure your heart keeps beating. Mike and Frank of Antique Archaeology don't swap out your IV bag.

If Everyman gets a fact muddled, or makes a poor conclusion, or draws the wrong meaning from the facts in a primary source, the worst thing that happens is that a few folks draw an erroneous conclusion. That's it. Their conception of the past might get just slightly skewed.

In the end, no one dies because of a slightly skewed conception of a fact about the past.

So don't just begrudgingly let Everyman be an historian; truly celebrate it. Because, frankly, there's no harm for them to do.
Posted by John Rudy at 12:30 AM