"The People for Whom He Saved the Union": Ninety Years Ago in DC 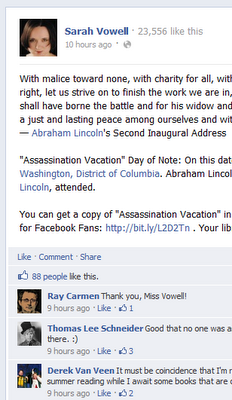 Reading the official Facebook page of one of my favorite history authors yesterday, I saw a pithy note about a "day of note." Ninety years ago this week, President Warren Harding dedicated the Lincoln Memorial at the west end of the National Mall in Washington, D.C.

If ever there was a landscape where the story of the Civil War and the story of Civil Rights have collided in technicolor majesty, it is on those steps. I pointed out as much a couple weeks ago. And author Sarah Vowell pointed out yesterday the first time that Memorial was the scene of Civil Rights strife - the very first day it was open. From its beginning, the temple dedicated to Lincoln has been the scene of conflict over the paltry detail of the color of the skin of some Americans, the very, "people for whom he saved the Union."

It's a throw away line, the detail that the dedication of the Lincoln Memorial was a segregated affair. I've used it as a stark underline of the point that the Civil War was the beginning of an end to racial strife, not an end fully achieved. But to be honest, I've never dug that deeply into the hearts and words of the black folks who experienced that ultimate snubbing, that theft of the Great Emancipator's shrine from under their noses.

The snub was palpable to Black communities across the country, both those dotting the District and those lying hundreds of miles away. In Saint Paul, Minnesota, The Appeal indignantly told its predominately black readership that, "Colored Americans were segregated in the seating of the audience during the dedication."

Shelby Davidson, the executive secretary of the Washington, D.C. branch of the NAACP sent a somewhat-public letter to the organization's national headquarters. Dignitaries. white and black, were given tickets for the event's platform. "Platform seats reserved for white were in chairs and within hearing distance of the speakers," The Appeal reprinted Davidson's words on June 10th, "while back of those seats were those reserved for colored people, roped off from those occupied by the whites and placed about a block from the Memorial in the grass and weeds, with rough hewn benches without backs or supports."

Adding insult to injury was the fact that flanking the black dignitaries. "placed at the entrance to these seats were marines who were distasteful, discourteous and abusive even to swearing in the presence of our women who accompanied their husbands to the celebration." Baltimore's Afro-American on June 2nd recounted the experience of Whitfield McKinley, "well known local real estate dealer," who was ordered by one of the armed Marines to sit on his assigned bench. When McKinley responded that he'd, "think about it," the Marine gruffly responded, "Well think damned quick."

The Afro-American, with no lack of bravado, recounted how, "a near riot ensued and the crowd demanded the transfer of the marine elsewhere." When a nearby officer declared that the Marine were, "the only thing to do to keep the colored people in their place, twenty-one persons arose as one and left the enclosure."

The Saint Paul Appeal, addressing African-American citizens of the state who had sent her sons eastward to be slaughtered at places like Fredericksburg and Gettysburg fighting for the freedom of the slave, noted that, "it is a wonder that Lincoln did not turn over in his grave."

In Salt Lake City, Utah, The Broad Ax told its black readership that the Washington branch of the NAACP had petitioned President Warren Harding to unseat the Superintendent of Capital Grounds and Buildings, the man responsible for the segregation of public spaces in the District. The incident at the Lincoln Memorial wasn't the first, but, "the second of its kind in less than two months, the first being the placing of segregation placards in Rock Creek Park." The Broad Ax reprinted the NAACP's stern warning to the Republican Harding:

It would be a rude awakening and a painful disillusionment to us to realize that the party was approving and following a practice which was an incident to the institution of chattel slavery.

For black citizens across America reading similar details in their own local newspapers, the fact that the Lincoln Memorial was segregated spoke all too loudly. It told them where the White House and the rest of America stood on their equality. The promises which Lincoln made in 1863, through a Proclamation destroying slavery and an immortal address Lincoln gave at Gettysburg, rang hollow and empty as they echoed through the halls of that marble temple. Lincoln didn't need to be standing over a kneeling slave for 1922's black folks to see what their predecessor Frederick Douglass had noted in 1876: that Lincoln was, "preeminently the white man's President." White America had gone out of their way to claim him as their own, snatched from a black populace questing for some icon around which to rally.

If we stop imagining the Civil War in 1865, we aren't getting the whole story. If we stop in 1877, we're only a few steps down the highway of the Civil War. The dedication of the Lincoln Memorial was a battlefield in 1922, in some sense just like Shiloh or Petersburg, where men faced off over the momentous concept of freedom and liberty. This week the 90th anniversary of that battle of wits, minds and words passed by like an historical speed bump. How many more opportunities to remember the other battles of the Civil War, the ones that took place in the hundred years after the white men put down their swords and shook hands, will we leave by the wayside before we realize they are integral parts of the Civil War story as well? Wars don't end, they linger for decades, even centuries. No place was that more clear than on a day in late May 1922, when the war erupted once again on the Mall in Washington.
Posted by John Rudy at 12:30 AM