"Forever Free": It's Deja Vu All Over Again

A friend and colleague has a great quip she uses when planning Civil War interpretation in the DC area. "Why," she asks, "would a black single mother with two daughters come to this event? What's here for her?"

It's a strawman argument, but strawmen can be useful. In essence, she's asking why the American People would come to this or that event. Why would the, "Not We," come to this event? Why would anyone who doesn't already care about this place with all their heart come out?

Those are keen questions to ask. The aim of the game here is not simply to hold the line against a setting sun of relevance, but to extend relevance to the American People.

The best example of failure on this front comes out of the Civil War Centennial. Centennial events were coordinated and planned nationally down to the most minute detail. They were structured and organized by a steering committee on high. And the center of their commemorative target was Gettysburg, as it rightly should be. Gettysburg is the cultural icon of the Civil War period, it will forever sit at the heart of the American people chiefly for the consecration of 10,000 dead men Lincoln provided. Gettysburg was an apt symbol the national committee wished to use to push their own concepts of meaning and importance.

The other symbol was at once far more ephemeral and more concrete: the President. John F. Kennedy, the young, vibrant chief executive would add a sense of weight and meaning to the day. The national committee tried to get on Kennedy's schedule for July 4th, 1963, offering him the keynote speech on a day explicitly about linking military conflicts to the meaning of the war.

Kennedy refused. He went to Europe instead.

The national committee was left with a choice: find a new, less shiny headliner or restructure the whole kit-n-kaboodle.

Fast-forward half a century and look at the coming year of Civil War Sesquicentennial offerings. Look at what we've seen so far. The United States Postal Service picked two commemorative stamps to encapsulate the Civil War in 1862: a smokey battle at New Orleans and a line of nondescript troops marching at Antietam. Tantalizingly, the word, "Forever," dangles up in the corner, as if to taunt me. The quotes splattered across the souvenir sheet of stamps are all about blood and guts.

The docket of real, in-the-flesh events this year is likewise odd looking, considering how monumental 1862 was in shifting the cause for which both sides were, now in stark in actuality, fighting for. The NPS has organized a series of "Signature" events, orchestrated by a national committee, that encapsulate the war. This year's list is blood and guts, just like the quotes on the stamps. The commemorations look just like the ones back in 1962.

Where is the signature event for the Emancipation Proclamation? You can argue that Antietam fits the bill, and if the topic doesn't come up there I would be both surprised and mortified. Still, that place's commemoration will not be about Emancipation. Emancipation will inevitably be the sidelight to the blood and glory.

Where is the stage on the steps of the Lincoln Memorial on September 22nd? Where is the podium where Oprah and Morgan Freeman and (gasp) Barack Obama can celebrate (yes, celebrate!) the simple stroke of a pen that ultimately set into motion a stunning Civil Rights movements the likes of which Lincoln nor his contemporaries could imagine? Where is the massive celebration of freedom where buses can roll in from around the country, pouring forth visitors to join in as we as a nation, one voice now united, sing praise for a document which freed 4 million held in chains? 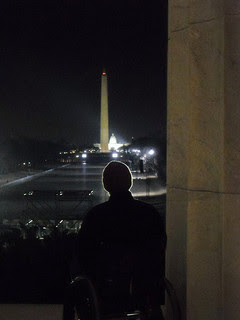 Without a keystone, signature event to celebrate Emancipation, a giant media spectacle to catch the attention of every man, woman and child in America, we stand to only reach the same old ears. Without an event that CNN, ABC News, the Today Show and BET could send their cameras to, we will be reaching the same people we always do.

Holding the line against the encroaching darkness is simply not enough. We need to spread relevance, we need to expand our tale's audience so that all of America can find meaning in the Civil War story. We should not be happy with visitation numbers that only shrink by small increments each year. They should grown.

One of the first steps toward that goal? A real, live and physical signature event celebrating Emancipation and Lincoln's courage. And who better to host such an event than the folks who guard, protect and cherish the places most integrally linked with Emancipation - the National Park Service?


EDIT / UPDATE:
Credit where credit is due... Allen Guelzo (Department chair in Civil War Era Studies at Gettysburg College and one of my bosses) adeptly pointed out on Facebook that Gettysburg College and Gettysburg National Military Park have partnered to tackle a commemoration on September 20-22nd this year. Kudos to GETT for not making the same mistakes our forebears did 50 years ago.

The challenge and need stills stands, however, for a national signature event that the press and the Hollywood jet-set can underline. The iconic landscapes of the Lincoln Memorial or the White House lawn are the ultimate tangibles when it comes to the Proclamation.
Posted by John Rudy at 12:30 AM