You Can Hide `Neath Your Covers: Confronting the Boss

Public servants are paid to serve the American people. Do it well."

It's not often that I quote or even think about Donald Rumsfeld. I'm pretty sure he doesn't think about me at all. Still, that quote above is a keen (if obvious) observation that so often we in the world of public service Civil War interpretation forget. I work for the Federal Government in my 'real' job. This blog is where I brain dump everything else rattling around in my mind. Inspiration strikes at all hours, and last week the bolt came out of the blue around 12:30am. I grabbed my new iPhone (which my boss jokingly calls my 'third arm') and began feverishly typing out my thoughts. You read the post that those fever dream thoughts became last week.

But as I was typing into the tiny glowing screen, Jess turned to me and asked, "What's it like to work 24-7?"

I thought she was making a disparaging comment, that I should just put down the phone and sleep for God's sake. I tried to slough it off.

"No, I mean, it must be great to do something you love so much that your brain is constantly working at it," she fired back, sincere and weighty.

For me, imagining and re-imagining how to tell the story of the Civil War to the American People is a thought virus. It has infected my brain, replicating in every nook and cranny. It seeps into nearly every waking moment of my life, and even into my dreams. I have a full-on, terminal case of the Civil War.

I love what I do and I take it very seriously. But I conceptualize it fundamentally differently than many folks I've seen out in the field. I work for the American people. That's the charge I take the most seriously. When Federal employees are hired, they're actually sworn in, lust like legislators and Presidents. And part of that oath is to, "bear true faith and allegiance," to the Constitution, a document which is nothing but the paper embodiment of the body politic: the American People.

Notice my capitalization there. Rumsfeld didn't capitalize, "people," and I did. I treat those two words like a sacred object, like the very religious insist on capitalizing every single occurrence of the word, "god," when it refers to their particular brand of deity. To me, the American People are an inviolable deity all their own, and I serve at their altar and bow at their wisdom. They are, in every sense of the word, the Boss. 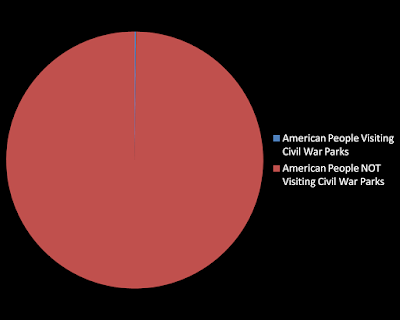 These number are ballpark, but they're frightening to say the least. The American People aren't visiting Civil War parks. Only a tiny subset of Americans visit these sacred places. So the fundamental question is simple but insidious: who should we be aiming to reach?

One camp advocates for speaking to the already-converted, the crowd who demand to know simply, "who shot who and where." When I worked at Harpers Ferry, one of the affectionate names we used for these folks were, "cannon-huggers." Like their cousin, the tree-hugger, these folks are already dyed-in-the-wool stewards. They are not potential converts, they are full-fledged members of the choir. They are the .17% we already know how to reach and speak to. If we continue down this incestuous path, our numbers will continue to shrink as each successive generation of the already-stewards dies off. We will be left with largely empty parks by the 200th anniversary of America's seminal conflict.

Don't believe me? Ask an average member of the American People (or Canadian People for that matter) on the street what in God's name the War of 1812 was about.

But who are the 99%? Every member of the American Public pays to support Civil War battlefields through their tax dollars. Should we be content with only reaching less than 1% of those people who fund us? Or should we focus on reaching the entire American People, helping every member of the national patchwork find relevance within our special places? Isn't that the path to ultimate preservation, far more powerful than check dolled out to save a few acres here or there?

And how can we forge that relevance without letting down our die-hard, cannon-hugger crowd who both demand and are content to know simply "who shot who and where?"

At the turn of the 19th Century, town planner Patrick Geddes pioneered the concept that we today distill into, "think globally, act locally." I think this is one tactic which might start solving this problem. We need to change the public's perception of what visiting a Civil War site has in store for them. We need to reach out into communities beyond the "cannon-huggers," into the groups of people who find no relevance whatsoever in the Civil War. We need to help them find ways they might care.

While doing this massive outreach, we need to focus our interpretation within our sites on the audience at hand. Sometimes, when the audience is seeking it, this will mean "who shot who and where." But we need to be brave enough to shift and change as new audiences come to our sites, introducing new themes and jettisoning old ones. In the end, we are not keepers of history tasked with telling the whole story. We are simply facilitators, acting as translators as the American People attempt to understand the words these places can speak to them. We cannot rest on our laurels, demanding that as soon as a member of the American Public comes to a site, they will learn to care about a place for the same reason that everyone else does and has for decades.

Relevance is not static. Significance is not something you can codify with legislation. They are simply ephemeral concepts, nothing more. Historic places are only given meaning when life is breathed into them by the American Public as they struggle deeply with the meanings.

Relevance and significance have expiration dates. But sometimes we're simply too headstrong or scared to realize that who the American People might have changed in the past century.

These are all half-baked ideas, I know. But that's what happens with late night inspirations. They percolate constantly, flowing forth each week half-formed and half-birthed onto the pages of the blog: braindumps in full public view.

Really, isn't that what we do in the end as interpreters? Aren't we just trying to transform thinking into a full-contact spectator sport where the American Public are simultaneously the players and biggest fans?
Posted by John Rudy at 12:30 AM