4th and Goal: What is the Interpretive Touchdown? 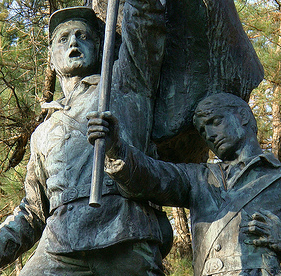 My chips tend to fall somewhere between Freeman Tilden and David Larsen, the two 20th Century sages of interpretation to whom we genuflect quite often here. Tilden adeptly noted that the, “chief aim of interpretation is not instruction, but provocation.” Larsen, likewise, captured the chief role of the interpreter within his Interpretive Dialogue when Nedlit muses that, “You will never prove the importance of this place to everyone. You will only be able to create opportunities for people to realize it on their own.”

Interpretation can never be, must never be rote dictation of meanings, facts or lists of information. It must not be teaching in the typical sense and definition of that word: imparting received wisdom to a student. It instead is something far more sophisticated.

Our job in historical places is not to share a complete historical story, not to educate the public on the practices and craft of the historian, not to simply teach about what happened where and when. We leverage history, we use history, but we never teach history. The job of the interpreter is to help the whole American people connect through their hearts to a place.

At historic sites, we use historical stories to do this, but we don’t teach history. We offer opportunities for people to feel significance within a landscape through the tales of historical characters and their struggles within that place.

In teaching, the outcomes are concrete and rightly should be. They are testable, with students able to recite and restate facts and figures, dates and concepts, arguments and perspectives.

In interpretation, the outcomes are far more ephemeral. Instead of wanting people to walk away from a program knowing what George McClellan’s greatest achievement was or what happened to Sullivan Ballou’s body after he died, interpreters want people to understand what McClellan’s warped and chaotic mind was like to live inside and to feel the heartbreak that Ballou’s scorched skull, desecrated corpse and charred shirt sent home to a wife in Smithfield, Rhode Island.

To do this, we employ facts. We use battle narratives. We use the events that happened on a landscape. But simple descriptions of the events and dispositions of men on that landscape can never be enough to reach deep into the souls of every American and help them to find a personal meaning in a historic place. Our job is not to have people walk away from a place knowing history. Our job is for people to walk away feeling history. We cannot, nor should we attempt to fix the deficiencies in the American educational system. We can only supplement the work of the educational system, not supplant it, as our societal role is fundamentally different from that of ‘teacher.’

The most important concept in interpretation, the part that separates it fundamentally from teaching, is the necessity of layering meaning atop meaning. This can happen in various different ways, but the most effective in my opinion is the concept of the historical echo. Presenting the meanings of a place as they echo and reverberate through time, as different groups at different points add or attempt to subtract meanings from a place, creates a diverse smorgasbord of perspectives, a vast buffet from which every American might find a meaning to fit their personal soul. Stretching the chronology of a place beyond what I’ve called in the past “Three Days in July Syndrome,” offering the shifting meanings of a place, offers that many more windows that the American people can use to find their personal meaning in a place.

This requires courage on the part of our interpreters: courage to discover that their personally held meaning is only one of many vibrant ones, courage to allow the American people to find meanings in a place that the interpreter might not agree with and, most importantly, courage to admit that enabling legislation is only an artifact of the past, a relic of a moment when a park was created, and not a sacred cow of meaning which hovers and triumphs over all others. The concept of a singular meaning encapsulated by Congress forty, sixty or eighty years ago somehow being the ‘end all, be all’ meaning for a place, never to change, shift or morph, is not valid and, more importantly, is in direct violation of the principle that interpreters should hold closest to their hearts: the visitor, and therefore the American people, are sovereign.

How can we from one corner of our mouth declare that the visitor is sovereign, allowed to take from a place any meaning they wish and find relevant, while from the other corner proclaiming that a specific meaning dictated by a group of powerful men now long dead trumps all others?

So let there be intellectual conflict. Let there be open debate in our parks, site, house museums, battlefields and other special places over why these places matter (or don’t). Let the American people come to their own conclusion. In the end, it cannot be about passing along a received wisdom or a received passion, like the wisdom of the ages passed from learned scholars or Congress to the American public as holy writ. We must instead have the courage to let our visitors find their own personal passions.

Because this is the fundamental core of interpretation. And as Larsen’s Nedlit asks in the Interpretive Dialogue: “Do you have enough passion to help visitors develop their passion?... If not, you’ll only communicate with people who already agree.”

You’ll notice I used the phrase, “American people,” a lot this week. I’ll try to have some reflections on why I intentionally did that come next week. Until then, good luck out there on the front lines.
Posted by John Rudy at 12:30 AM