In 1961, Gettysburg played host to a kick-off event for the Civil War Centennial. The town commemorated the sendoff of the Independent Blues, a militia company which marched off to war in the aftermath of the firing on Fort Sumter. The affair was huge. The Diamond was closed off to traffic as actors in old time clothes strutted through a political rally on the square. Spectators watched from the sidewalks as speakers mounted a wagon and gesticulated wildly at the crowd. Gettysburg College's students, wielding trumpet and drum as they did for Football games on Nixon Field, stood in for the town's 1861 marching band.

The event was at times insensitive and downright weird. Save for the College's band, the event was a dumb show, with speakers mounted on the Hotel Gettysburg piping in speeches for the historically dressed mimes atop the wagon calling for Union. Among the photos of the event in the collection of the Adams County Historical Society is one that, for all the world, looks to depict a white woman in black face and dressed as an old style "mammy" parading in Carlisle Street in front of the Majestic Theater. This only a stone's throw from the Third Ward and Gettysburg's real black community.

Narrating the event was, among others, Joseph Rosensteel, one of the prince's of Gettysburg's Civil War dynasty. The town swarmed to the event. Cannon fired from behind the train station as Gettysburg's 1961 civilians watched Gettysburg's 1861 civilians see their soldiers off to war.

Fast forward fifty years. This April, the Gettysburg Convention and Visitor's Bureau, along with Main Street Gettysburg and a number of other partner organizations, will begin the 150th commemorations in Gettysburg. The Convention and Visitor's Bureau promises that, "...we will unveil special events and programs that will add to the Gettysburg experience, offering a special glimpse into the lives of those who lived during the American Civil War and how that war shaped our country today." (emphasis added) 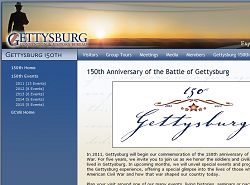 First, on April 7, 8, 9 and 10, Greencastle will reenact the skirmishing that town witnessed as Confederate forces crossed the border into Pennsylvania during Lee's 1863 Gettysburg campaign. They will also offer the ubiquitous 5K run that now seems to accompany every community event anywhere, this one, "for History."

Next, on April 15, 16 and 17, Chambersburg will reenact the burning of Chambersburg in 1864. The press material paradoxically notes that, "This April," those who suffered from the July burning of the town, "will be remembered." To add to the schizophrenia, J.E.B. Stuart will be representing his 1862 raid into the state, and Robert E. Lee will be having an 1863 Disney-esque 'Character Breakfast.'

Third, on April 22 and 23, Fairfield joins the fun, presenting, "a day of living history activities to recreate the skirmish that took place in Fairfield on July 3, 1863." For those counting, that would be a celebration of the 147 year, 9 month and 20 day anniversary of that skirmish. I know about golden and diamond anniversaries. Is this the aluminum anniversary?

Finally, Gettysburg culminates the series on April 29 and 30. Touting Saturday as, "the official 150th Gettysburg Kick-Off Event," much as their forebears did in 1961, the site details perhaps the oddest of the four weekends' festivities. The event will feature a, "Holding the Line," skirmish representing the Federal defense of Cemetery Ridge, as well as a reenactment of the street fighting along Baltimore Street of July 1, 1863. Route 15 will be closed to allow reenactors to fire finicky reproduction weapons in historic streets, play acting in cartoonish images of death where brave soldiers actually died. Following a, "Kick Off Ceremony," at the Pennsylvania Monument, a 150 round, one-hour cannonade will shake Gettsyburg's windows and tables from different locations surrounding the Borough (just in time to disrupt the peace of anyone enjoying a late Saturday dinner hour). The Bureau promises that the, "highlight of this event will be the firing of 150 cannon shots to salute the brave men and women who fought in the American Civil War."

The events cover every year of war SAVE 1861. Remember my emphasis added line above? "...offering a special glimpse into the lives of those who lived during the American Civil War..."


This speaks to what I'm beginning to call 'Three Day in July Syndrome.' In phrasing it this way, I am not picking exclusively on Gettysburg. It's simply that, "One Day in September" (Antietam) or "One Day in July and Another One in August" (Manassas) don't have the same ring. This syndrome's greatest symptom is a singular fixation on a narrow view of a landscape's wartime connections.

Remove the battle for a place like Fredericksburg and you still have a rich Civil War landscape with deep connections that can make the events of 1861 relevant to a modern audience. John Hennessy and his crew at FRSP have been doing yeoman's work looking beyond their five days of battle in December to the larger picture of the Civil War (and Civil War commemoration) in the community of Fredericksburg.

The Civil War was not fought in hermetically sealed bubbles. Battlefields, as landscapes, existed long before Robert E. Lee and George McClellan decided to have a tiff upon them. The farmers who worked those fields were, as is any American today, political creatures with opinions and feelings. Some of them were, on deeper southern fields, slaveholders with integral ties to the larger war. Others, on northern battlefields, were freedmen who equally had a vested interest in war even before it arrived on their doorstep. Ken Burns titled the 1863 portion of his documentary, "The Universe of Battle." But to study the landscape of battle solely through that universe, as if the ground was made from time immemorial explicitly as the ground for two armies to let each others' blood upon, does the American public a disservice. The people of Adams County, Pennsylvania's war began in April of 1861, not on July 1st of 1863. These citizens' war did not end on July 3rd of 1863, but continued on (some would argue into the present day).

So what could actual sesquicentennial events for April 2011 look like in south central Pennsylvania? I'll discuss that in part 2 next week.
Posted by John Rudy at 3:00 AM