Adventus: The Great Coming of 1862

A couple of weeks ago, I spent a weekend in Harpers Ferry helping to interpret that amazing place for the National Historical Park's annual Christmas 1864 event. One of the greatest joys of my desk job in interpretive training is getting back out into a parkscape to test out new ideas and practices. This time it gave me the chance to experiment out in the field, wearing the olde-timey clothes of the 1860s and discussing how hammers, anvils and black labor won the war through the U.S. Quartermasters Depot at Harpers Ferry. The event is amazingly fun and infinitely powerful in its most intricate moments.

The weekend also gave me the opportunity to once again take on the annual Saturday evening lantern-light tour. Typically, that event focuses on the town's contributions to Sheridan's operations in the field in the last winter of the war.

But this year felt like it needed to be different. Even though the event was focused on 148 years ago, my mind kept slipping back just two years further. As I planned out the program, I couldn't help but keep coming back to the idea of 1862. On the whole, very little has been focused nationally on the sesquicentennial of the first national crack in the wall of American apartheid, a crack whose size would wax and wane over the course of the next century and a half. It felt like a duty to the slaves who waited anxious in 1862 to tell their story this Christmas.

Mel Day, stalwart coordinator of the living history volunteer program in the park and the woman who taught me much of what I know about how interpretation functions, asked me what I wanted the evening tour titled. "Should I just put it down as, 'Captain Flagg's U.S. Quarter Master City: Approach of Peace 1864,' same as the event?" she asked me over the phone.

"No!" my mouth answered gruffly before I could temper it. I reeled for a minute. What to name it, I thought quickly, what to name it?

"Emerging from the Darkness: Christmas in a Land at War," I heard my mouth say.

"Did you just think that up now?" Mel asked. I answered that I had. "I don't understand how your mind works like that sometimes," Mel said. Sometimes I don't either, I thought.

I started 'reading' the audiobook of Penn Jillette's new book Everyday is an Atheist Holiday on the way in to work that week as well. His first chapter is all about Joy to the World and celebrating the mundane days (and not simply waiting for future redemption) as a way to make life really matter.

Penn's words melded with 1862, and inspired this Park Ranger. My mind was racing. Suddenly, it all fit together.

The opening stop of my tour was simple, but oh so sweet. It was one of those moments. And this is somewhat like what I said that night in the big tent, as my crowd prepared to bundle up and walk into the cold streets and back in time...


-----
We come into this place from the darkness, the cold of winter. The Civil War was a period of intense darkness for America, a time when men killed men and when America tried to tear itself apart over the question of freedom. But this time of year is also considered sacred, and has been by cultures around the globe for centuries. Dozens of cultures, across the centuries, have had a festival in the dark, cold months of the winter.

In the 1860s, in America, one of those festivals was Christmas. 150 years ago right now, America was preparing for another Christmas in a land at war, with sons in fields far flung from home.

The period before Christmas, the four weeks before, are called Advent, which comes from the latin adventus which means arrival or approach, or simply coming. Christians in 1862 were preparing for Christmas in this time of advent.

And one of the ways that Christians prepare for the coming holiday is through songs and carols. Joy to the World is one of those songs. The lyrics were first written in the 18th century by Isaac Watts. The music wasn't added until the the 1830s. Like so many great American songs, we stole that tune. It was cribbed in 1839 from Handel's Messiah by preacher Lowell Mason.

But Watts' lyrics, Mason's song, isn't about joy in the world right now. It is truly a song of advent, looking forward to a second coming of Christ and joy still coming. "No more let sins and sorrows reign, and thorns infest the ground," is an incantation for a future, not a present.

In December of 1862, there was another advent going on, another expected coming. This advent wasn't waiting for a savior to descend but for a simple document. Months before, in September, Abraham Lincoln had penned the Preliminary Emancipation Proclamation, promising that, "on the first day of January, in the year of our Lord one thousand eight hundred and sixty-three, all persons held as slaves within any State... in rebellion against the United States, shall be then, thenceforward, and forever free."

And America began a long advent, a time of intense waiting.

For some in the South, it was waiting with dread at the potential collapse of their social structure, dread of revolt by a population living in their midst that in places outnumbered whites 3-to-1.

For some in the North, it was waiting with baited breath, incredulous at the thought that, after a long, dark night of injustice, heartache and imprisonment, that slavery could begin ending with the stroke of a pen, if only Lincoln kept his promise.

It was advent. It was a time of waiting for this world of, "sin and sorrow," to pass away and a new, different, uncertain and frightening world of freedom to take its place.

And in that time of advent, there were songs too. Songs of hope and of freedom yet to come.

One of those songs, which slaves would sing in the streets of a Virginia city south of here just a few short years later as United States soldiers marched to their salvation, went like this:

Welcome to the long dark advent of the Civil War. And as we venture into the darkness, we can take that song of hope with us. 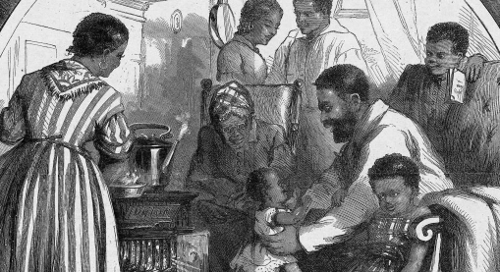