Kings and Princes: Christmas in Gettysburg, 1862 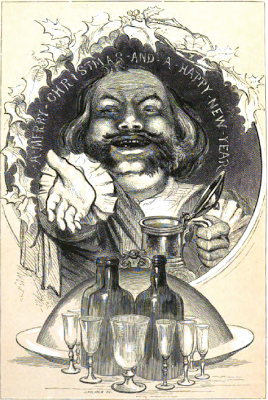 Sire, the night is darker now,
And the wind blows stronger;
Fails my heart, I know now how,
I can go no longer."
"Mark my footsteps, good my page;
Tread thou in them boldly;
Thou shalt find the winter's rage
Freeze thy blood less coldly."

In a house along the first block of the north side of Chambersburg Street, a small metallic ticking noise signaled change. The calendar read December 24th, 1862. The rhythmic tapping was a voice, reaching out in code along thin strips of metal dangling from poles running to the east out of town. Soon, "Hanover, York, Harrisburg, and Baltimore," were sending their glad tidings to Gettysburg's citizens. Then soon, Gettysburg found herself on that Christmas Eve connected, "with all the world and the rest of mankind," the Adams Sentinel reported. In the home of John Scott along Chambersburg Street, the telegraph had come to Gettysburg. Lightning could now send words to the far-flung corners of the nation from the Adams County seat.

Outside the doors of the home, Gettysburg was busy, but not extraordinarily so. The youth of the town were gathering supplies for the next day's reveries. As dawn broke, "'Young America' was on hand in the morning," the Gettysburg Compiler reported, "with firecrackers, &c., but we do not think that the usual investment was made in that sort of thing." The surrounding countryside saw its fair share of muted but still joyous noise. As Christmas Day crept into night, the flames of a fire flickered through the darkness south of town. "We were informed," the Compiler reported, that the fire was, "the burning of several stacks of hay and fodder at Dr. Shorb's." The culprit for the blaze? "The fire is supposed to have been caused by fire-crackers."

Other Gettysburgians found themselves in far less familiar surroundings that Christmas. A member of the 165th Pennsylvania Infantry reported home that his surroundings were bleak that yuletide. Writing from Virginia, the soldier found, the country from Norfolk to Suffolk shows the ravages of war. Everything is laid waste." The soldier, chatting with an officer, learned that near his camp had stood seven barns in the span of just a few hundred yards. "And what is left? Nothing! Yes, nothing - all destroyed, and the fertile fields laid waste."

Still, in a desolate landscape like Southern Virginia, the soldiers from Adams County were undeterred in their Christmas plans. "My mess concluded to have a grand Christmas dinner," the corespondent penned, "so, with that intention I went to town." Visions of a grand dinner swam before the soldier. "A turkey, or a young fat goose?" he dreamed. But when he arrived at the market, "there were but three turkies, and they were poor, and as for a goose, there was none at all." Christmas dinner that year in a camp in Suffolk, Virginia consisted of, "three pounds of pork, three pounds of corn flour, a quart of molasses, and a package of pepper." Still, the stalwart reader of the Democratic Compiler reported, there was little benefit in complaining. No one, he wrote, groused, "as hard as the Abolitionists." Through his politically slanted eyes, the Abolitionist soldiers, "groan at an awful rate for home."

The days of December were growing short, and 1863 was just on the horizon. And what would 1863 hold for Gettysburg? The Compiler's editor, Henry J. Stahle, stared into the tea leaves of, "an old tradition, published many years ago," in the form of a poem. "Christmas," he noted, "came on a Thursday." Then came the poem, lilting and brash. Perhaps it was a slight bit prophetic, considering the coming harvest of blood in July of 1863:

If Christmas on Thursday be,
A windy Winter you shall see,
Windy weather in each week,
And hard tempests, strong and thick,
The Summer shall be good and dry.
Corn and beasts shall multiply;
That year is good for lands to fill;
Kings and princes shall die by skill."