From the pages of William Lloyd Garrison's Liberator published in those first few elated moments of 1863: 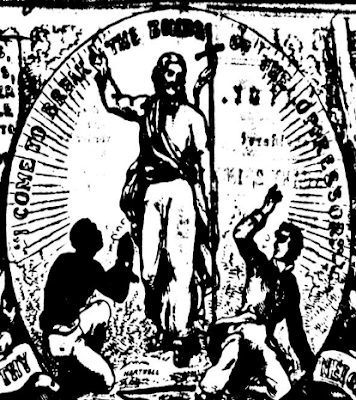 A Happy New Year's Greeting to the Colored People
in the Department of the South.

In accordance, as I believe, with the will of our Heavenly Father, and by direction of your great and good friend, whose name you are all familiar with, Abraham Lincoln, President of the United States, and Commander-in-Chief of the Army and Navy, on the 1st day of January, 1863, you will be declared "for ever free."

When in the course of human events there comes a day which is destined to be an everlasting beacon-light, marking a joyful era in the progress of a nation and the hopes of a people, it seems to be fitting the occasion that it should not pass unnoticed by those whose hopes it comes to brighten and to bless. Such a day to you is January 1, 1863.

I therefore call upon all the colored people in this Department to assemble on that day at the Headquarters of the 1st Regiment of South Carolina Volunteers, there to hear the President's Proclamation read, and to indulge in such other manifestations of joy as may be called forth by the occasion. It is your duty to carry this good news to your brethren who are still in slavery. Let all your voices, like merry bells, join loud and clear in the grand chorus of liberty — "We are free," "We are free," — until, listening, you shall hear its echoes coming back from every cabin in the land — "We are free," "We are free."

The New York Times reported that three thousand men, women and children turned out to let those merry bells ring, to shout those sainted words.

And men, women and children gathered again a century later, in the symbolic shadow of that, "great and good friend." And once again echoes were sounded from the throats of a people still traveling a long and winding path:

Let freedom ring from the snowcapped Rockies of Colorado!

Let freedom ring from the curvaceous slopes of California!

But not only that; let freedom ring from Stone Mountain of Georgia!

And when this happens, when we allow freedom to ring, when we let it ring from every village and every hamlet, from every state and every city, we will be able to speed up that day when all of God's children, black men and white men, Jews and Gentiles, Protestants and Catholics, will be able to join hands and sing in the words of the old Negro spiritual, "Free at last! free at last! thank God Almighty, we are free at last!"

Will it ring still? Can you hear the merry bells still? Strain your heart and listen.