Resolute on the Eve of Emancipation 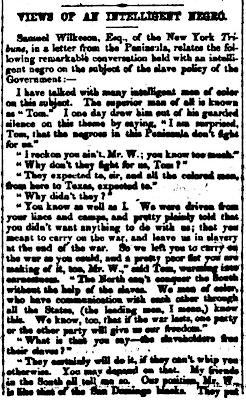 The future of the Emancipation Proclamation still was not yet written in the final few days of 1862. In the White House, Lincoln was polishing and weighing his words. But outside the walls of the Executive Mansion, there was doubt and uncertainty. Would he? Countless ministers in the north penned petitions urging him to follow through on his threat of September. But were the petitions enough?

For one man on the Peninsula, it wouldn't matter. His name was Tom, Garrison's Liberator reported in a snippet reprinted from The New York Tribune. Tom's conversation with a Tribune reporter named Samuel Wilkeson was both intriguing and incisive. Wilkeson was traipsing about the area around Norfolk and Fortress Monroe, speaking as he went, "with many intelligent men of color," on the question of emancipation and freedom.

While Sam Wilkeson was fighting a war with a pen, paper and the telegrapher's key, his son Bayard was fighting with field artillery and hot iron. As the ink dried on the Tribune and Liberator that December, Sam was serving as First Lieutenant in the 4th Light Artillery, Battery G., lobbing shells across the Rappahannock River at the rebel hordes. Eventually, Bayard would fight at Gettysburg to disastrous results. Each Wilkeson fought the battle against the Slaveholder's Rebellion in his own peculiar way.

Wilkeson asked a simple question. Why didn't the black men of the South fight for the United States?

"They expected to, sir," Tom told Sam, but they, "were driven from your lines and camps, and pretty plainly told that you didn't want anything to do with us; that you meant to carry on the war, and leave us in slavery at the end of the war."

Still Tom, from his perch on one of the lowest rungs of society, could see the plain truth: "The North can't conquer the South without the help of the slaves.... We know, too, that if the war lasts, one party or the other party will give us our freedom." Whichever side offered the slaves their freedom would win their loyalty. "We mean to sell ourselves for freedom," Tom exclaimed, "we hope to you Northern men."

Tom could see more. "How long would this war last, if we were freed by act of Congress and the President's Proclamation," the wizened slave explained, "the rebel armies would melt away in a week." But if the war were to be won, then it needed to be won in whole. If the United States was to be won, Tom explained, "you can't save it without the social revolution," without destroying slavery.

Sam's account ended with a keen warning from the former slave. "You white men of the North will go into slavery," Wilkeson reported, "unless you take us black men of the South out of slavery; and Mr. W., you have not a great deal of time left in which to decide what you will do!"

Did Tom really exist? It's tough to say. He very well might have been a clever literary device derived by an anti-slavery reporter trying to capture the stakes in the waning moments before Lincoln would or wouldn't make his move.

Sam Wilkeson's opinion was clear regardless. The words of Tom, whether he existed or not, should be heeded. For Sam Wilkeson, abolitionist reporter, emancipation must come. And through the blood of thousands of black and white soldiers, including Sam's son Bayard, emancipation would come.
Posted by John Rudy at 12:30 AM