"...our hearts tell us there is something else out there.": Prowling the Halls of the MIB 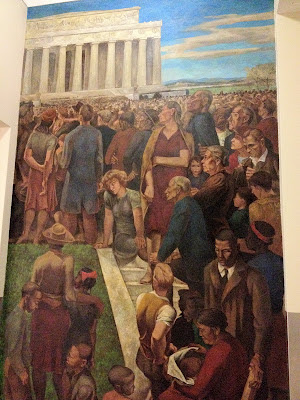 In the basement corridor of the Main Interior Building in Washington, D.C. is the most beautiful painting I've even seen. I've gotten the chance on a couple of occasions, while visiting the Department of the Interior Headquarters for meetings and whatnot for work to wander down outside of the cafeteria to see the mural. It is pure beauty, mostly forgotten and ignored by the folks who work in that building everyday. I get these weird looks while I stand in awe of the massive canvas, like I shouldn't stop and stare. I don't care. I take pictures. I gawk. My mouth hangs agape.

An Incident in Contemporary American Life by Mitchell Jamieson, installed in 1942, is my favorite painting. And true to form, my love has as much to do with the subject as the art. The floor-to-ceiling mural, so vivid you could step into it's muted colors, is an amazing window into the past. And that moment is a quintessentially American day in 1939 when Harold Ickes stood up for equality of opportunity. He offered up the Lincoln Memorial as an altar of freedom from which Marian Anderson would sing after the Daughters of the American Revolution refused to let her use their stage because of the color of her skin.

But Ickes and Anderson have nothing to do with this painting. If you look at this massive image of the painting from the DOI website, you can see that the black songbird and the Secretary are specks on the stage in the distance.

The painting is about the act of listening, of observing. The painting is about the people, the ordinary people, who witness grand moments in history. They're white, they're black. Unlike the crowd at the dedication of that vast temple to liberty, the crowd Anderson's concert was integrated. And in each face, a story starts to bubble to the surface. This man looks on in hope, that one bows his head in sorrow. This woman eagerly listens to the wafting music, that gazes into the eyes of her child. Is she dreaming of a future? Or is she fearing that the world he grows up in won't be much different than the one she has?

History is made by people, not the ones on stages, but the ones in the crowds. And every member of that crowd has a story. A painting is not am image, it is only paint on canvas in coordinated brush strokes. The mural of history is exactly the same. If we pause to look at all those brush strokes at once, give them all their individual due in the grand larger picture, history becomes beautiful and complete.

And if we put our noses right up to that canvas, like I did last time I was in the basement outside of the cafeteria, and look at one of those simple brushstroke, it too speaks volumes.