"The Wrong shall fail, The Right prevail, With peace on earth, good-will to men!" This past Saturday night, I was standing in one of my old haunts. The Dry Goods Store at Harpers Ferry National Historical Park is perhaps my favorite place to be an interpreter, especially at night. Low wattage lightbulbs (simulating whale oil or tallow lamps) and the darkness outside the windows make that building a perfect time machine. Near the end of the night, a family came in with two enthusiastic sons. One wearing a toy kepi and carrying a brand new souvenir envelope of Confederate money rushed around the store asking if he could, “buy that with this.” His excitement at being in the historical space could not be contained.

The other boy was more sedate. He was wearing glasses and bundled in a sweatshirt against the dark cold outside. He quietly looking over each of the objects near the back of the store, studying them.

“Well, there’s some knives in there, but there’s also a razor for shaving your face, and a strop to keep the razor sharp,” I replied.

“And what type of pistol is that,” he continued down the line of windows guarding artifacts.

“I believe it’s a Colt,” I said, “after John Brown’s raid here, thousands of pistols were solid all across Virginia. People were scared of abolitionists and wanted to protect their families from violence. So they bought weapons.”

Then the magic really began.

“I saw a bigger gun than that on Pawn Stars,” the boy excitedly shared, “it had a lever and went like this.” He mimed a lever-action repeater in his hands.

“You know, by 1864, soldiers started being issued those guns in Georgia. They were called Bummers. They foraged for supplies and food for the army when Sherman was trying to end the war.”

My friend and one of my mentors, John King, tucked his hand and voice into the conversation. He dropped a chuck on something in front of the boy and it thunked on the glass case like a rock. “You know, that killed more than all of the repeater rifles and pistols combined in the Civil War?”

The boy studied it. The hunk of something was pitted with tiny holes, hard and mummified.

“This is hardtack, what the soldiers were issued to eat. It’s so tough that they had to soak in it coffee just to bite it sometimes. See those holes there. What do you think caused them?”

“Do you have Playdough at home?” I asked.

“The same stuff as is in your Playdough: flour, water and salt. Do you think you could live on nothing but this and bacon?”

“Don’t you need vegetables?” I asked with a smile.

“Good! They keep you healthy,” I said, “If you ate nothing but this bread and bacon, your digestive system would be a big waterslide. Men in the Civil War died of diarrhea. They pooped themselves to death because they couldn’t keep any water or food in their bodies.”

It is. It’s facts like that, when you say them aloud, that force your body to quite physically commiserate with the people of the past. Your stomach sinks for them; you want to vomit on their behalf. You feel, for just a fleeting moment, the Civil War alive inside your stomach. He wandered down the counter, still studying every single thing he could touch and see. After a fascinating few minutes spent with a stereo-viewer, imagining visiting Paris or Jerusalem in his own living room, just like he can with his TV remote today, I plunked another photographic technology on the counter in front of him. A small ferrotype photograph of a face in profile.

“You know what that is?”

“It’s a picture of someone.”

“Exactly, do you see anything weird about it?” I asked.

“No, he’s not,” I encouraged him. The boy’s mother began to hover over his shoulder to catch a peak as well. I revealed the answer: “he’s dead.”

His mother exclaimed, “It’s a person! I didn’t even see that until you just said that. Look at the detail!”

“I know, look how detailed it is,” I said. The boy took the picture in his hands, holding it close to his face to inspect every line in the corpse’s face.

“Photographs took a few seconds to expose in the middle of the nineteenth century,” I explained, “but when you’re not shooting a picture of someone who needs to stand still, the detail can be perfect.”

The boy lowered the photo and looked at me again. “I saw a picture like this on Pawn Stars, where the person was dead.; it was easier to take their picture because they had to wait like 10 seconds to make it and they didn’t move because they were dead,” he blurted out fast, like it was all one word spoken in a single breath.

“Why might you want a photo of a dead person?” I asked.

“How many pictures of your Mom do you have in your house,” I asked, looking to catch his mother’s eye.

“If your Mom died, and you couldn’t see her anymore, you would still have lots of pictures to remind you of how much she loved you, right? They’d help you if you were sad?” I asked.

“Yeah, I could look at the pictures of her.”

“Imagine,” I said, “if you were in the 1850s. You might get your picture taken every few years, maybe. What if someone you loved died and you didn’t have a picture of them?”

“You could take one of these,” the boy exclaimed.

“And then you’d have at least one picture left to remind you of what they looked like and how much they loved you,” I helped him along.

A time machine, giving us small glimpses of the 19th century, is an amazing tool. You don’t have to step into a jury-rigged Delorian or a blue Police Telephone Box to travel into the past and try to feel what it was like to live then. You don’t personally need to wear an expensive set of period clothing to wear on an immersion weekend in the backwoods of Georgia or Pennsylvania.

All you need is a heart, some dim lamplight, a good story, a piece of 'the real' and a cold December’s night. 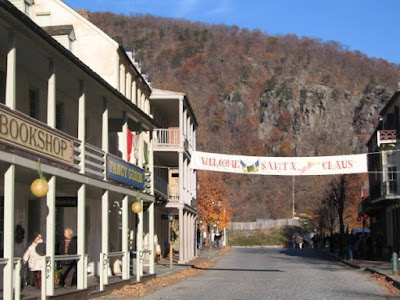