The Past is a Foreign Country: But They Still Eat Ketchup There 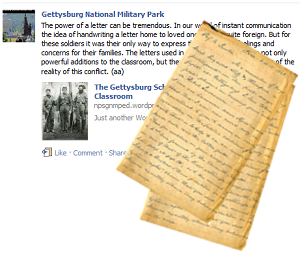 Earlier this week, the folks over at the Gettysburg National Military Park Facebook page posted a link to their Gettysburg School Bus blog highlighting a post on integrating the Civil War into a language arts curriculum. I love the concept. I think in the current educational environment, which seems to be spurning history and social studies in primary classrooms, anywhere we can integrate the stories of the past into the state's standards, sneaking the history back in, is awesome.

But the Facebook post got me thinking. Particularly the way it was phrased, and especially this tidbit:

In our world of instant communication the idea of handwriting a letter home to loved ones seems quite foreign. But for these soldiers it was their only way to express their thoughts, feelings and concerns for their families.

The concept of difference, of discontinuity with the past, is often the first place our minds drift as both historians and visitors at historic sites. It is one of the stumbling blocks of many living history presentations. The "gee-whiz, they were so darned different back then," factor can make the past seem like "a foreign country," as L. P. Hartley described it.

But is it really? And is accentuating the differences really the most powerful technique when we try to help visitors connect and find relevance within the past?

One of my students, a promising historian and avid 19th century chemist named Cory, was frantically trying to polish a paper Monday night in the office on campus at the same time I was entering this semester's grades across the room. We started talking about 19th century photographic techniques and that particular Facebook post. The conversations began to weirdly cross wires...

I recently listened to a story on NPR's Fresh Air about a cave in France filled with prehistoric paintings. The Chauvet-Pont-d'Arc Cave, and the travails of documentarian Werner Herzog to capture its wonder, caught my imagination. It still swirled in my mind Monday night discussing the weakness of interpreting the differences.

In the cave are paintings encrusted with thousands of years worth of calcite, brilliantly preserved. Crafted in charcoal, the pictures can help conjure the image in the mind of an itinerant early hominid, obsessively studying a majestic herd of bison crashing over a dale. He rushes back to the dank cave and by the dim light of a half-extinguished torch frantically tries to fix the image on the wall, trying to freeze the fleeting moment in time.

Just a few millennia later, you can conjure an itinerant enlightenment artist standing at a canvas. He glances over the edge, back and forth from taught fabric to blushing beauty to canvas again. He obsessively studies every line and crease of her evanescent youth as he places brush to canvas. Then he frantically tries to fix the image on the canvas, trying to freeze the fleeting moment in time.

Less than a century later, an itinerant early photographer, obsessively focusing his camera on a putrefying landscape of death and destruction. He stares at the frosted plate on the back of the camera, obsessively studying the death and destruction before it succumbs to its transformation from human to dust. Then he frantically shuttles the sensitized medium from wagon to camera to fix the image on a glass plate, trying to freeze the fleeting moment in time.

Just a century and a half later, an American, living in an increasingly itinerant culture, obsessively studies a sunset as the burning orb creeps toward the horizon. She squints at the bright neighbor-star, all the while adjusting the exposure rate of her Nikon digital camera. Then she catches the precise color in he eye, raises the camera and frantically snaps shot after shot, trying to freeze the fleeting moment in time.

We are the early man. We are not separated from him. Our humanity unites us. Our impulse to preserve the moment, the ephemeral and the fleeting unites us. You can understand, for just a moment, the ancient man. You feel the weight of his crude brush in your hand. Then you dip that brush in oil paint. Then you adjust the hand-ground lens of your camera. And you push the button, you snap a shot to preserve the moment.

What is a Civil War soldier's impulse within his letter? Nothing different than our perpetual impulse as humans. He wanted to connect. He wanted to, if only for a moment, feel the warmth of his family and friends. And he wanted to update the folks he left behind on his status.

The Civil War soldier's letter was not simply a private affair. It was to be read aloud in the parlour for aunt and sister and cousin. It was to be shared with the neighbors, reprinted in the newspaper, preserved for generations as a final sentiment of love from a dying son.

This status update was a human impulse, an impulse we still have. We post quick notes letting our friends know how life is going. We send them far away, hoping and praying those that see them read them and know we're in good spirits, happy, content, safe and still OK. Or that we're not and we desperately need help.

What is a Civil War soldier's letter but a 19th century Facebook update?

Isn't that sort of sameness far more meaningful, more able to put the pencil in your hand after frantic battle than pointing out how different a pencil was from an iPhone?
Posted by John Rudy at 12:15 AM