The Race of the Interpreter: "I'm Not Going To Spend My Life Being A Color..."

I am often put into an interesting place when recounting the tales of history. My passion is the history of race and abolition, the Civil War and the development of Civil Rights in the wake of the memory of our great fratricidal conflict. I'm white. Yet I am never afraid to broach the subject of race. Stephen Colbert's character on The Colbert Report often mentions that he doesn't, "see color." I would never be that bold. But I will say that I try to ignore color when I am interpreting to an audience. Put an audience of white visitors in front of me and I'll still tell them about the black characters in the drama of American history. Put a group of black visitors in front of me and I'll help them to see the landscape through any historical eyes, black or white.

Perhaps I'm naive, but I don't think there is such a thing as white history and black history. I think there is history. Some of the characters are white and some are black. All are intriguing. 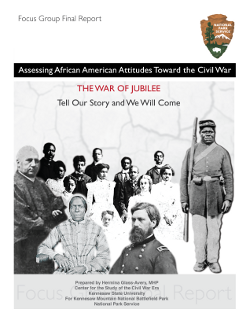 I am not so naive to think that race has had no bearing on history. In fact, that's quite a bit of what I study. I delve deep into the minds of racists wearing hoods and lighting crosses on Civil War memorial landscapes. Likewise, I try to see the world from the lenses of racial egalitarians on quests to destroy a vial system of slavery based solely on a slight difference in pigmentation. I look at the evil and good in human character. But I can draw inspiration from the black characters in these narratives just as easily as white, in spite of my own skin color.

Why do I bring this up? I've been mulling the concept of black history for a while. Back in January, Kennesaw Mountain National Battlefield Park released a report on prospective black visitors to their site. One of the questions and a few of its answers have stuck in my mind, rolling around.

The survey leaders from Kennesaw State University posed the following question to their focus groups: "If you visited Kennesaw Mountain or another Civil War site today, what would be your expectations regarding the historical and cultural interpretation of the American Civil War?" Two answers stick out to me.

Imagery. We need to see people who look like us - Black people - to feel comfortable. They need to be part of the staff and decision-makers.

We keep getting people from, no offense, these big universities up north somewhere to come down and to tell us about the south. We need to invite people who look like African Americans – not just our White friends… We need people from the Talladegas, the Tugaloos, the Tuskegees, because they have kept a record of this history… We really need to bring the people who have lived these experiences.

I've asked the question of who owns black history before. The question still resonates with me. I understand the desire for diversity in the workplace and the world. I want to see every color everywhere. That's the very definition of America.

But can a white face tell a story about a black face and black hands? What did these respondents mean when they said, "we need to see people who look like us," and, "we really need to bring the people who have lived these experiences." In the case of the Civil War and slavery, those who, "lived these experiences," are long lost to us. Instead, we have their stories left. Why does it matter who tells that story?

The report's compilers suggested that Kennesaw, "consult with researchers, local historians and experts at HBCUs for consultancy opportunities to uncover African American history." HBCUs are wonderful resources. I had the pleasure of visiting Tuskegee University last year and sitting down for a chat with a brilliant student Park Ranger with a true passion for Booker T. Washington and the Civil Rights movement of the early 20th century. But even he would not have said that black colleges are the sole arbiters of the history of Americans of African descent. This past summer, as part of my experimental programming on John Brown, my tour explicitly featured one white and one black character. The twin pillars of Thomas Boerly and Dangerfield Newby can help illustrate the pure tragedy of John Brown's Raid on Harpers Ferry. But I saw tears in the eyes of white folks over Newby's struggle against slavery to free his wife and children in bondage in Virginia. I saw tears in the eyes of black folks as I narrated the tale of Thomas Boerly, struck dead in the streets of Harpers Ferry while trying to defend his family from harm as his adopted home came under attack.

There are no black tears. There are no white tears. There are only tears. In the end, it shouldn't matter whether the characters in our stories are black or white. It should matter that they're human and that their struggles move our souls. Likewise, it shouldn't matter what color skin our interpreters have, but instead we should judge the content of their tales and their ability to move us.
Posted by John Rudy at 12:00 AM