We've Got A Movement Down in Selma: Day 5

"My people, my people, listen. The battle is in our hands. The battle is in our hands in Mississippi and Alabama and all over the United States.... And so as we go away this afternoon, let us go away more than ever before committed to this struggle and committed to nonviolence. I must admit to you that there are still some difficult days ahead. We are still in for a season of suffering...."

One of my friends, a young woman who is like a sister after 54 miles of walking, got overheated as the speakers were on the rostrum yesterday afternoon. Together we had walked from Selma to Montgomery, a family welded together one the road. Quite a few miles back we had discussed her high school in Little Rock and the idea of ownership of powerful places. She was befuddled by the fact that some people think her high school — where nine brave sets of feet marched into a schoolhouse and changed history in 1957 — shouldn't continue its powerful mission to push America's youth forward. They think it's too important for students anymore; it should be an historic site and nothing more.

Meanwhile, as historians are asserting control over her school, the place goes to ruin because it can't be a living landscape. A stagnant pool of water breeds mosquitoes out front of the historic steps. But try as they might, teachers and students can't get anyone to get the water flowing, make the place healthier and more welcoming to the students who call that place home. It's because those steps, that building is historic. And in 1957 there was no positive flow system on that now-stagnant pool.

Standing on the street in front of the Capitol building in Montgomery, I get the feeling those historians have. I feel like, in some sense, I can understand the impulse. I feel like those steps are mine, my inherited heritage as an American. I've written about this before, running right back to the very roots of the blog. That story sings to my soul. This march has been a pilgrimage for me. I was so excited to be standing at the head of the column, leading "We Shall Overcome" through a bullhorn as my voice slowly went south from shouting. And hearing the speeches, seeing the spectacle, feeling the power were going to be the highlight of an arduous journey.

Then I saw my friend, her skin flush, looking like she would collapse in an instant. And I forgot where I was. She's family, my sister. I used my magical flat hat and badge to help part the crowds. We set her on a sunny hill. And I hoisted a protest sign to block the sun from her face.

From then on, the speeches didn't matter. The day melted away. Friend after friend came to the hillside. Some were veterans of a 54-mile march. Some had only traveled the last 3 miles with us up Dexter Avenue But they were all family. Some were marching to remember family members who died 50 years ago during the movement. Others were here to be witnesses. Still more just were looking for an activation, for a moment where they've find what they were fighting for. They were looking for their Selma.

I could say it's because I was wearing that damned uniform, that magical hat. But if I said that I'd be lying. I wasn't a park ranger yesterday. I might have had the arrowhead on my shoulder, but it wasn't some sense of duty making me fan folks, talk to them, joke with them about how much Bernice King's cadence is copied from her father's recordings. It was because we're family now. Toss that hat aside, throw the badge away? I'd still have ignored the speeches and helped my friends.

When she arrived, I promised my friend's mother that I'd make sure she got home safe. And yesterday afternoon her mom picked her up in the parking lot of the Lowndes County visitor center a bit battered and wilted, but none-the-worse for wear.

As we said goodbye, I joked. "And get that reflecting pool in front of the school fixed!"

"I don't know about that," she replied.

"Just rattle the cages," I said, "Make some noise."

"That's right," she said, her mother visibly not quite understanding anything that was going on, "I'm an activist now. I can change it."

My heart broke open at that moment and poured out of my eyes. We all changed the world this week. And we'll keep changing it. We are family in no light sense of that word.

We've got a movement going down in Selma. 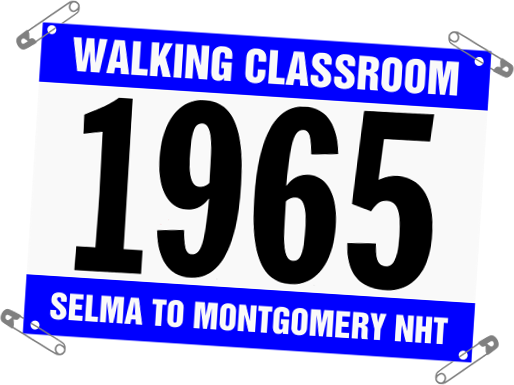