The Thunder of the Marching Men of Joshua: Day 3 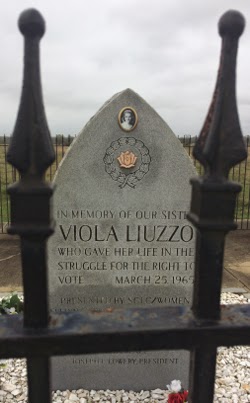 "Let us march on ballot boxes until the Wallaces of our nation tremble away in silence.... There is nothing wrong with marching in this sense.The Bible tells us that the mighty men of Joshua merely walked about the walled city of Jericho and the barriers to freedom came tumbling down."

I was thinking of Viola today. She drove the family's 1963 Oldsmobile to Selma from Michigan, desperate to make some sort of difference. She trekked 800 miles to try to put even a small dent in the color line's seemingly impenetrable iron curtain. And the home she left wasn't all milk and honey. Detroit was scarred with segregation, a literal 6-foot high "Berlin Wall" separating white families from their black brethren.

But the movement was in Selma. So Viola drove.

We came here too this week. The places we all left behind are pockmarked and scarred by new battles, new fissures, new cracks. But the movement is here. So we move with it.

Viola was white. In 1965 that meant she was "normal." Not in reality, but in society's warped sense of the word. And today, I fit that bill too. I'm white. I'm male and straight. I'm middle class. I'm steadily employed with health benefits and a loving wife who supports me constantly.

It means a lot to me that another "normal" person came here in 1965. It means a lot that this wasn't only a black man's fight, but a fight undertaken by all mankind. It makes it a little easier to feel like I'm allowed to fight for others' freedom from my highly privileged position. After all, if you don't leverage that privilege to the good of all mankind, what good is it anyways?

Viola was shot along the roadside after veering off of Route 80 to find shelter from rampaging Klansmen. White men, men who looked just like me, killed her. They killed her for sitting beside a black man in her car, for shuttling marchers back to their homes. They shot her in the head twice and the 1963 Oldsmobile with Michigan license plates veered hard into a ditch.

The black man beside her, Leroy Moton, dipped his fingers into Viola's gushing wounds and smeared her blood on his own face, his own body. Even in death, Viola Liuzzo was helping her fellow man. When the Klan members checked the car, they found the two bloodied corpses. But one wasn't dead.

We stood next to Viola's monument today, a giant tombstone shaped chunk of rock along Route 80. As some of the group shuffled down the hill to resume the long march to Montgomery, I lingered at that wrought iron fence for a few more precious moments staring into Viola's eyes.

She gave up so much for so many people. She died for an idea. She died for a simple act of kindness into which she had invested hours, fortune and heart. She died, in some ways, for me.

The iron bar was cold but I gripped it hard. She didn't need to die. Hate is irrational. And murder for blind hatred is doubly irrational. But it sometimes feels like a cycle that can never end.

Viola won in the end. She never saw it, but black men and women who lived just a scant few steps from where she died found their full citizenship in the ballot when LBJ signed the Voting Rights Act on August 6th. Viola was cold in the ground but America was still marching forward.

Two weeks after Klansmen took chunks from Viola's exquisite face with a shotgun, someone in Detroit burned a cross on her family's front lawn. No good deed goes unpunished.
Posted by John Rudy at 11:30 PM