Finding The Good: An Emotional Anniversary

I am an exacting judge of interpretive product. I realize this. My boss and I have had a few discussions about how both of our standards, sometimes, might be just a bit too high.

I still am not convinced that pure and utter excellence is not too much to ask for on every interpretive program. All too often, though, I don't find it.

When I do see amazing moments, it thrills me. I get outrageously excited. Through my entire experience as a visitor at the sesquicentennial celebration at Gettysburg, two programs stand out as verging on that sort of gleaming excellence.

The first one was on the afternoon of July 3rd. Standing at the wall, where fifteen decades before the United States was saved and slavery's ultimate demise was clinched, it would have taken effort to not offer up some meanings. They could have been rote, expected meanings. But what happened instead was something personal, something pressing beyond the simple bounds of battle mechanics and "boxes on a map."

Ranger Caitlin Kostic was offering up a moment in time. She tried to help us live as Hays' brigade, if just for a brief moment. She wasn't trying to "teach" anything. Her aim wasn't to have us walk away with knowledge, but with a feeling, a visceral moment of the fear that rippled through those men's hearts on the afternoon of July 3rd so many years before.

She helped that field sing in a way I have rarely seen displayed by LBGs, historians and rangers alike. Her short program was the embodiment of a future for military interpretation, not bogged down by excessive quotes and mechanics, but embedded in human experience and universal emotion.

By Thursday, I was spent. Monday had found me spending six solid hours leading tour groups across the campus of the College. Tuesday I wandered from site to site from noon to (literally) midnight. Then Wednesday was the sapping heat at the Angle.

But I'm a sucker for civilians. I am convinced, as I've said time and again, that the last great frontier of Gettysburg research lies in the experience of civilians and their interaction with the military landscape. So a tour focusing on the civilians, starting at the Brien Farm, was too good to pass up.

Ranger Jared Frederick led us on a short walk down the ridge line where Ijust had stood the afternoon before. 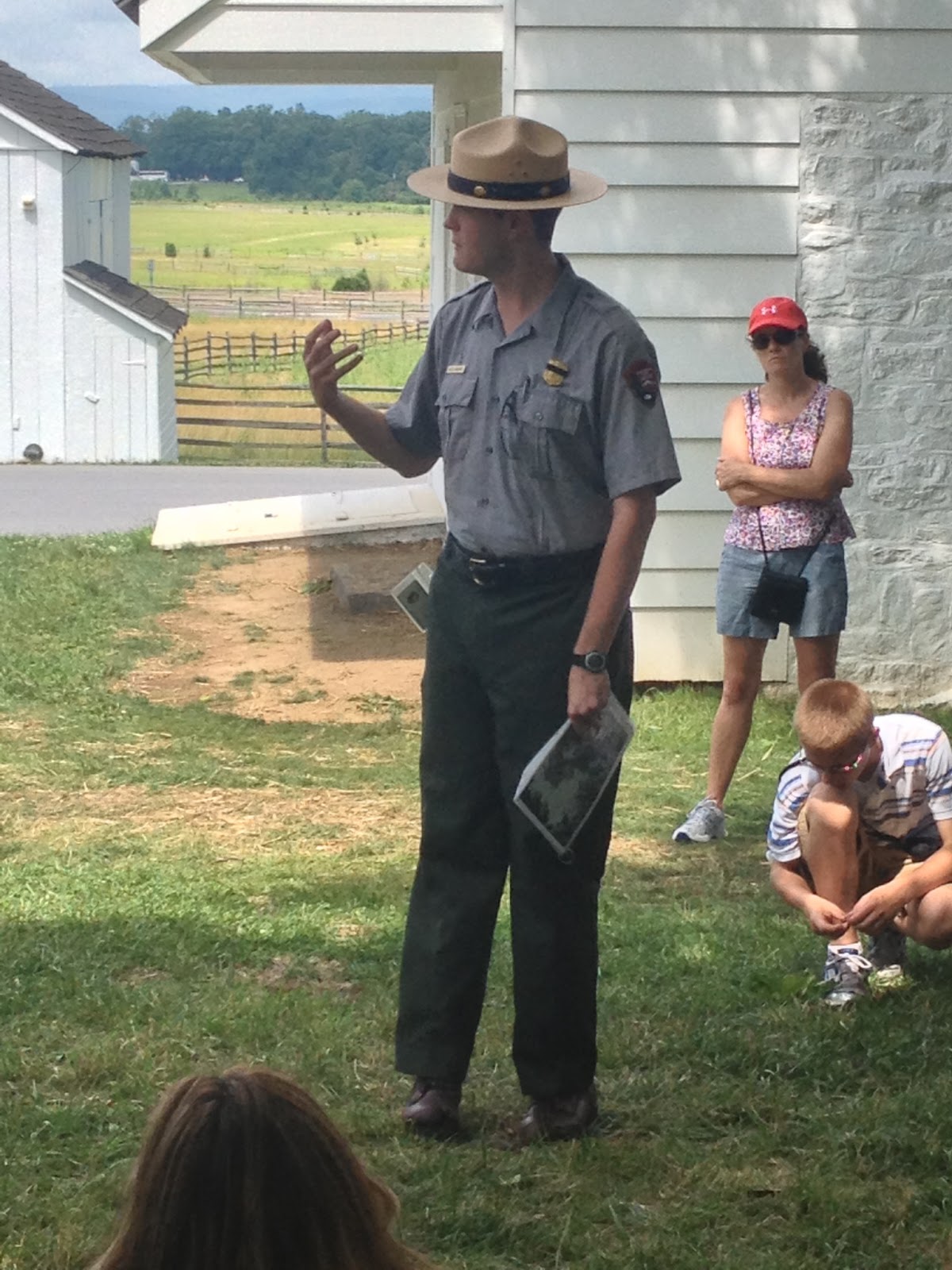 When I am on an interpretive program, my mind usually races in a continual internal monologue of, "what would I do." It can be amazingly painful when you see an interpreter tripping and missing the obvious meanings, missing the opportunities.

I leaned to a friend as Jared was speaking about the Bliss Family's farm burning on July 3rd. "That farm. The damage claim he's using covers the things you can replace, the crops, the fences, the barn. What about the family photos? The heirloom quilt?"

Then something happened that barely ever happens. Jared said nearly the same thing I had whispered. He described the Bliss' beloved collection of books and family photos, the things that when tragedy strikes can't be replaced.

My heart soared. Jared saw it. He saw where his audience could find themselves in the story, in the Bliss' experience. He put their life into terms we could understand. Not flank movements, not laundry-list damage claims, but sorrow and loss.

It happened again and again as Jared walked us down the ridge.

He let the landscape drag him around by the nose (or rather by the heart). Each place we were standing dictated the perfect story as he guided the experience. He pointed; he made sure he had things to point at. Not one of his stops felt jury rigged or awkward. Everything just fit.

Gettysburg came to life for me for a few brief moments on this most meaningful of anniversaries thanks to Caitlin and Jared. Brother and sister, you speak my mind.
Posted by John Rudy at 12:30 AM