In the days after his famed stand in the schoolhouse door, Alabama Governor George C. Wallace attended to the business at hand on his desk in Montgomery. Wallace served as chief executive in an office in the first home of the Confederacy. One of the things awaiting Wallace on his return from Tuscaloosa was a letter from Paul L. Roy of Gettysburg.

Roy was editor of the Gettysburg Times, and was endeavoring to get letters from each governor sending their tidings of goodwill to Gettysburg on the hundredth anniversary of the momentous battle. The idea was pure. And most governors responded with purity.

Governor Endicott Peabody of Massachusetts wrote to Paul about how, "All Americans look to the green meadows of a peaceful Gettysburg today and pray for the continued and strengthened union of all the states." Pennsylvania Governor William Scranton chimed in, noting that, "Our American family is the family of mankind, and our neighbors are our brothers, whatever race or accent. Those who fought at Gettysburg waged their lives in a bloody tenant of this democratic maxim. It prevailed, and America has grown great under its guidance."

In Montgomery, George Wallace prepared to write his own letter. In Tuscaloosa, he had just made a potent statement about his vision for America. "The unwelcomed, unwanted, unwarranted and force-induced intrusion upon the campus of the University of Alabama today of the might of the Central Government," Wallace read to a crowd gathered in front of the University's auditorium, "offers frightful example of the oppression of the rights, privileges and sovereignty of this State by officers of the Federal Government."

In his own letter, Texas Governor John Connally wrote to Editor Roy that, "Today we live in a changing world which generates perplexing problems. We must not condemn these changes, nor attempt to still the hands of the clock."

Arkansas Governor Orval Faubus wrote to Editor Roy before Wallace made his stand, before Kennedy made his speech that same night, before Medgar Evers lay in a pool of blood in his driveway just a couple hours later. But his state had known strife over school integration as well. "I think it is also an appropriate time to re-dedicate ourselves," he assured the editor and his readers, "to those principles of freedom and democracy which Abraham Lincoln so aptly expressed in his now famous and immortal Gettysburg Address." If America was to deal with the real enemy, the world's, "external dissension," it would mean quitting petty squabbles and realizing together that , "we must remain united if we are to endure as a nation."

Letterhead for the State of Alabama rolled through a typewriter in Governor Wallace's office. Hammered out on that 26-key-piano was a familiar tune.

"We must do our part to see that we remain a nation united in peace, retaining individual rights and liberties." Individual liberties, that was, save for those of Vivian Malone Jones and James Hood when they wanted to register as students at the University of Alabama. "Individual liberties must be safeguarded, for without freedom and liberty for each of us, we are traveling down the dead-end road of destructive centralization."

Wallace made a second stand in June of 1963, this time in the pages of the Gettysburg Times. And it wouldn't only be in the folds of the newspaper that Wallace would make his stand. The Governor had plans to make a special trip to Pennsylvania the first week of July.

In the Times' press room in the borough, Governor George C. Wallace's words rolled off the line inside the newspaper's anniversary edition. There his words were printed for all to read in stark lines of black and white, much like the nation that his words envisioned. 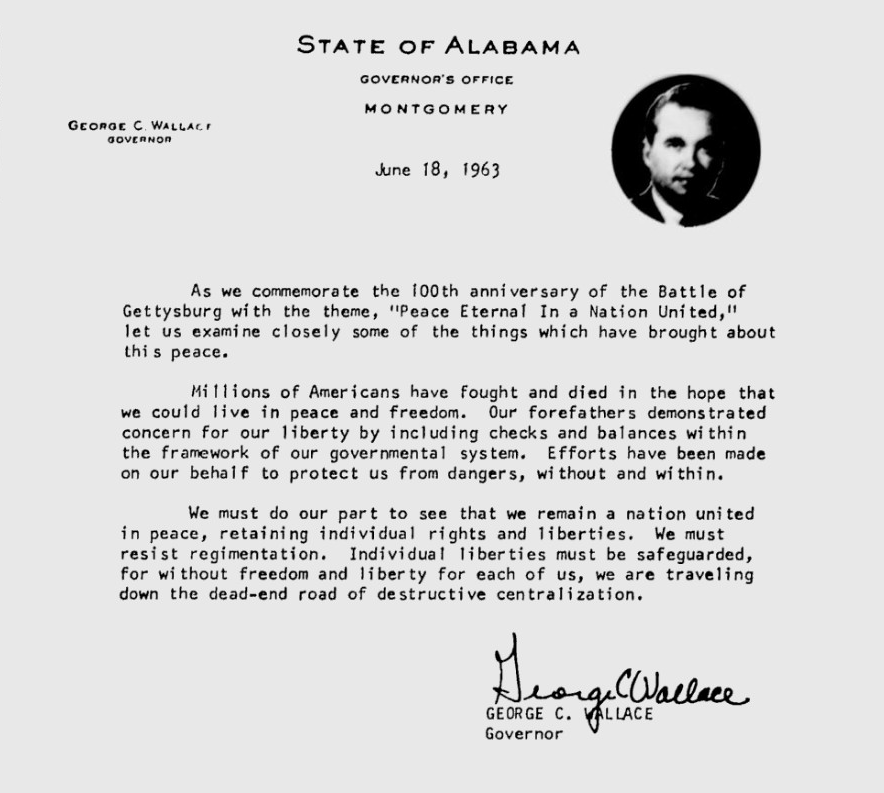