I walked up the long winding path named for Mary Custis and her family home. As I ascended the steps I stopped to quickly pay my respects to Robert Todd Lincoln. But he wasn't my quarry for the day. As I came to the top of the steps, Robert E. Lee's home hove into view. I've been inside Lee's house a few times. Each time has been interesting, but relatively hollow. Those four walls lack the raw power that the surrounding acres seem to ooze.

There is a supreme irony that Lee's palatial home and estate became the resting place for thousands of soldiers who died under the flag of the nation he fought to destroy. Arlington has always seemed to me like the ultimate act of comeuppance.

I hadn't taken the day off of work to wander through the halls of Lee's mansion, though. I walk around the house to the back. Two neat stuccoed buildings flank a courtyard. Back there, I feel a bit more comfortable. Ostentatious shows of wealth and privilege tend to chafe me. When I find myself at a big, fancy function, I tend to talk to the folks serving drinks and hors d'oeuvres more than the folks wearing slick suits and speaking smartly.

Behind Lee's house are the quarters where his slaves lived. The sorrow that the ground right behind Lee's mansion must have felt could fill volumes. That ground must have soaked tears from the vocal sobs of families torn asunder and men dreaming of freedom that might never come. Some of that sorrow was pent up in hearts, unexpressed lest retribution come at the slightest mention of unhappiness at centuries of systematized forced labor.

I kept wandering westward, through Mary Custis' rose garden and the ossuary full of unknown Federal dead, sacrificed on the altar of the freedom of 4-million slaves. I settled into a seat in the Old Amphitheater and waited in the sun. A woman brought programs around. Jake sat next to me and we wondered why there was so much security. Jake pointed at the program.

"It's because Secretary Holder is here," he said.

It was a surprise for both of us. We weren't there to hear President Clinton speak, we were there for Medgar Evers. Fifty years ago, as the clock rolled over from June 11th to June 12th, Medgar Evers was unloading t-shirts from his car after a Civil Rights rally when an assassin behind a nearby bush shot and fatally wounded the 37-year-old activist and father. Kennedy's televised words of assurance that Civil Rights would be ensured were still echoing across America. And now a gunshot was echoing across America too.

I sat transfixed by Clinton during the other speakers' words. I was paying attention in the same way he was paying attention: I was processing and thinking. Every so often, his hand went into his coat and drew out his pen. He would look up at whoever was speaking, think for a moment, then scribble a line or two on his draft.

Then the 42nd President rose to speak.

"But I think we should also try to avoid... the trap that all of us, particularly those of us who are no longer young, fall into when we remember. I am elated that the NAACP is trying to make sure that a younger generation of America knows and remembers, but we must avoid the temptation to confuse memory with meaning. There was meaning in Medgar Evers' life and death."

My ears perked up at the idea. Memory, commemoration, what we were gathered to do that day was not enough. Remembering, Clinton said, was not simply the answer. It was the meaning behind the past that mattered more. It was the opportunity to find inspiration to modern action in those who came before, not simply chant the old stories once again.

"When the chaplain was up here speaking at the beginning of the program, I thought all over again, it gave me chills, what we said to African-American soldiers from World War II: 'you go fight, get yourself killed, we'll give you a medal, bury you in Arlington. But if you're lucky enough to live, don't come home to the south and expect to be able to vote. Much less run for office and get elected, even if you live in a town where there are more African Americans than whites.'"

My mind skipped back to Lee's slave quarters, to the black men and women that worked the fields of Arlington and waited on Mary Custis in her palatial mansion house overlooking the fetid swamp that was (and sometimes still is) Washington City. Did some poor, enslaved black man till a field or harvest grain where Medgar Evers would one day be buried? What if he had known that long after he was dust, and his children were dust, a man would be assassinated because he thought that no matter what color your skin you should be thought of as a man first and foremost? And that man would be buried in Arlington National Cemetery as a war hero.

"The meaning of Medgar Evers' life and death is that he embraced the fundamental struggle that the great southern writer Eudora Welty said grew out of our sense of place which shapes us all psychologically, the struggle between those who believe their lives only count if they control the lives of others around them and those who feel better when they share the life around them with others, between those who think they really only count when they can dominate and those who've got sense enough to know that things only really work when they cooperate."

Change is hard. America tried to change in 1863. She desperately tried, as Lincoln signed the Emancipation Proclamation, as black men poured into the ranks, as the fight for Union morphed into a fight for freedom. And a century later, Medgar Evers crawled bleeding to his doorstep from his car, a stack of blood-soaked t-shirts scattered across the driveway in his wake reading, "Jim Crow Must Go." As Secretary of the Navy Ray Mabus noted earlier in the ceremony, "Medgar Evers, a century after the Civil War, died fighting that same battle, died to make men free. While African Americans were the obvious beneficiaries of his life's work, in a real sense, he set us all free."

Clinton continued: "It is easy to be for yesterday's change. It is easy to sanctify somebody's bones. And soon enough, we'll all be where people can sanctify ours. But the meaning of Medgar Evers' life was that he came home, and even though he had a gorgeous wife and beautiful kids and an unbelievable life to look forward to, he said, 'It can't be that I was a soldier in the American Army and I stood up for freedom and I can't vote, my neighbors can't vote. We're going back into a system that favors control over sharing, domination over cooperation and that'll never do.'"

"So the meaning of Medgar Evers' life is for all of you to say when you're confronted with any challenge today, look for the control side, look for the cooperation side and choose the right side."

I looked up at the Interpreter-in-Chief, making meaning and not simply recounting the facts of the past. I smiled. This wasn't simply commemoration or memorial for that man, that man who spent 8-years at the helm of a nation built of contradictions and fighting to overcome them everyday. This was a rededication, not of a grave or a monument, but of himself and through him ourselves to the great task remaining before us which Medgar Evers left tragically unfinished as he lay dying in a driveway in Jackson, Mississippi fifty years ago. Where does our world need change today?

And a Clinton spoke, thousands of black Civil War soldiers, long gone, stood to applaud their comrade Medgar, a fellow martyr for freedom. And as Clinton, a native son of the south, spoke, Robert E. Lee rolled over in his tomb in Lexington. The nation he forsook 150 years ago, today honors a man he might very well have enslaved, all in his own backyard. 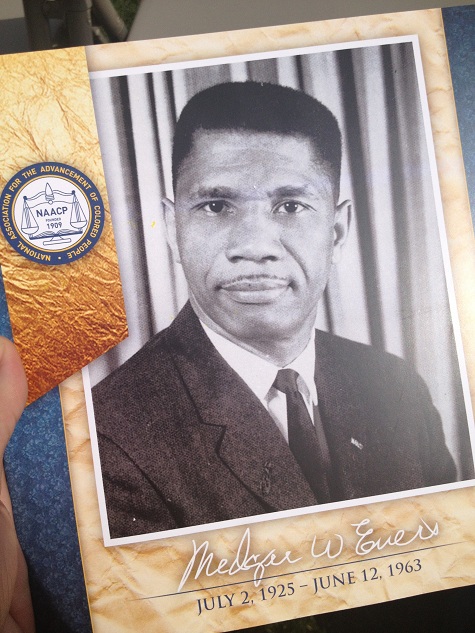