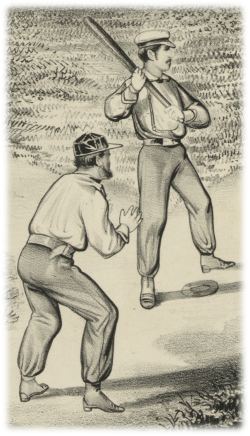 Somewhere in a field just north of the Pennsylvania College campus, a hurler threw a ball to a striker. The air was undoubtedly crisp. Novembers in Gettysburg can be cool. The local papers were already predicting that the winter of 1865-66 would come on early and bitter. Standing on the bases, men readied to run home and score another point for their team.

Beneath their feet, the frosty ground certainly crinkled and cracked. The game was the last of the season between the Aurora Base Ball Club and the Gettysburg Base Ball Club. The bat swung, wood connected with leather, and the run was driven home.

On the horizon just to the west of campus loomed Oak Ridge, where Federal troops had stood against a North Carolinian tide. To the north rose Blocher's Knoll, recently renamed Barlow's Knoll after the young commander whose men had retreated off of the soft hill. Exactly two years earlier, the President had arrived in town and Gettysburg rejoiced all night long. Now that President was dead, the intractable war was over and a new struggle over civil rights was emerging.

But today all eyes were on the game. Strikes and misses were called by local attorney A.J. Cover. The game continued and the score mounted. In the 3rd inning, the Gettysburg Club bested the Aurora boys, students of Pennsylvania College, 3 runs to 2. Last week's game had been a rout; Aurora beat Gettysburg 55 runs to 40.

The local citizens intended to put up a fight against the college kids today.

If a stray foul ball rolled back toward the College Edifice it might have hit a few mounds of earth or a wooden board, remnants of the battle fought there just a couple years before.

Would it have knocked into the last earthly reminder of Lieutenant William Cornelius Austin? The Lieutenant marched into battle at Gettysburg alongside his men in the 18th Virginia. Austin was struck in the left knee and foot by enemy fire on July 3rd, 1863. He died shortly after and was lain beneath foreign Pennsylvania soil behind the college's main academic building.

Perhaps the ball would have rolled to a stop above the mouldering bones of Daniel Wilson Partin. The private took a round to the left arm, just above the elbow on July 3rd while fighting in the 14th Virginia. Sheltered in the College's halls of learning, Partin lingered until the 23rd of July when he breathed his last. A wood board was carved and placed at his head bearing simply the misspelled inscription "Porton."

The crusty November ground saw grounder after grounder, run after run pound across it. The townie Gettysburg club and the student-led Aurora club fought valiantly for nine solid innings.

South of town, work progressed on a massive monument to the battle and the nation's dead at the center of the National Cemetery. And in the nearby Evergreen Cemetery, frozen earth was moved by pick and shovel for even more sainted dead. Each week pine coffins arrived in town in rail cars, native sons making the last trip back to Gettysburg. The Monday after the fierce base ball contest was ended, just two days away, two more coffins would arrive. One held the body of Isaac Sheads, returning home sealed in a wooden crate, never again to rise.

Sheads met his fate at the battle of Cold Harbor on the outskirts of Richmond in June of 1864. The 49-year-old carriage-maker died fighting alongside his comrades in the 87th Pennsylvania. The cold ground would fold over his rotting corpse just a week after the base ball game. 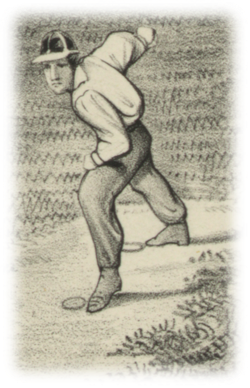 Behind the College buildings, the Gettysburg Base Ball Club was fairing well, mainly because of one star player: Theodore C. Norris. Norris pitched a decent game, giving up only 12 runs (the previous week's pitcher had given up 40 runs).

But more importantly, Theodore Norris crossed home five times, never being tagged or caught out through the whole game.

Norris had only been back in Gettysburg for five months. In late June, he began a long journey northward from New Bern, NC. The 28-year-old Gettysburgian spent most of the war serving in the 87th Pennsylvania. At Cold Harbor in 1864, he helped lead his company into action. Lieutenant Norris survived to play base ball with his friends in Gettysburg; Sheads was killed and buried in some godforsaken tangle of brush in Virginia.

America was a land changed. Soldiers brought a new game back home, a game which would infect the American soul. Some of the scars of that war which had killed over 600,000 souls would fade. Some were more permanent. Base ball, it seemed, was one of those permanent reminders of the war.

The Gettysburg Base Ball Club and the Aurora Base Ball Club walked off the field after nearly 3 hours of combat. They knocked the frozen soil from their shoes. The students from the college had bested the team from the town in gentlemanly combat.

As they walked to their warm homes along Gettysburg's streets or cozy rooms inside the College Edifice, they left behind those frozen Confederate bodies beneath the campus' ground. Somewhere rolling north in a cold boxcar, Isaac Sheads' body wended its way home. South of town, a monument to the valiant men who perished on a hot July day stood frosty and incomplete.