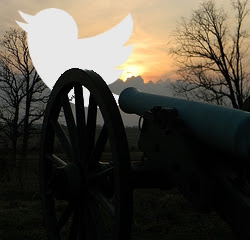 I teased this project a short while ago, and now that May has arrived history has begun coming back to life. Over the next three months, the men and women who walked Gettysburg's streets and crossed the Pennsylvania College campus will reenact their lives in the last few moments before Gettysburg changed irrevocably. As May creeps along, more characters will rise from the grave and begin reliving the past.

But this reenactment isn't about goofy clothes. It's not about marching around and pretending to shoot at one another in a grotesque weekend fantasy. It's not about action at all.

This reenactment is all about thought, particularly the thoughts of men and women 150 years ago. What was their life? What did they experience? And how would they have shared that had an iPhone been in their hands in 1863?

This is a virtual reenactment of Pennsylvania College's battle.

And it all began when Adams Sentinel editor Robert Harper joined Twitter 150 years too late:

@AdamsSentinel kicked things off with a few headlines.
Then Lieut. James F. Crocker of the 9th Virginia Infantry came back to life to celebrate Robert E. Lee's victory at Chancellorsville. And then he and the 9th Virginia began a march northward from Suffolk to join Lee in #Invasion63.

@real_JCrocker jumped on celebrating Lee's victory at Chancellorsville.
As the month goes on, professors will complain about too many faculty meetings, students will look forward to their graduation in August and one Gettysburg citizen will tag along as Pennsylvania College's students march off to war. Classes in the summer session of 1863 begin next week. Stay tuned to Twitter, both via the hashtag #Invasion63 and the master list of #Invasion63 accounts hosted by Pennsylvania College's official Twitter account.

Because the past will haunt your keyboard this summer, but only if you let it.
Posted by John Rudy at 12:30 AM