I've taken solace in the fact that Abraham Lincoln died laughing. Sarah Vowell, in her riveting and powerful Assassination Vacation, speaks about how, "it is a comfort of sorts to know that the bullet hit Lincoln mid-guffaw. Considering how the war had weighed on him, at least his last conscious moment was a hoot."

But Vowell expresses confusion at that laugh line, which Booth made one of the most momentous of all theatre history: "Don't know the manners of good society, eh? Well, I guess I know enough to turn you inside out, old gal — you sockdologizing old man-trap."

For years, I thought it was all lost in translation. That funky word "sockdologizing," getting in the way of our modern understanding of this apparently hilarious one-liner.

A few weeks ago, I tried to explain the joke to my class of college students. After delivering the line, prefaced with a warning that it's the biggest laugh-line in the play, the students stared back with blank expressions. I didn't blame them. I grasped for words.

"It's an insult; it's like insult comedy. It means she's a conniving woman. It's like a great line from a bawdy big-budget Hollywood frat-boy comedy today."

The line haunts me every now and again, I think because I've never understood it. My mind works like this weird melange of pop culture and history, with things swimming into my consciousness unbidden more often than not. I'll be walking down a hallway, when I hear my lips mumble, "sockdologizing old man-trap," and not know how those words got there.

That night, after class, it lingered in my mind. Why was it so funny?

At about 3am, I sat bolt upright in bed. I don't know if I had been attending Our American Cousin in a dream, or if I had been Lincoln in a dream or if it had just taken that long to process.

Mrs. Mountchessington's not the butt of the joke, I explained to myself, finding the words in my mind before I forgot the dream revelation, It's Asa Trenchard who's the butt of the joke. That one revelation is enough to slot everything else into place. The joke lives in the setup, not the punchline.

MRS. M: I am aware, Mr. Trenchard, you are not used to the manners of good society, and that, alone, will excuse the impertinence of which you have been guilty.

ASA: Don't know the manners of good society, eh? Well, I guess I know enough to turn you inside out, old gal—you sockdologizing old man-trap. 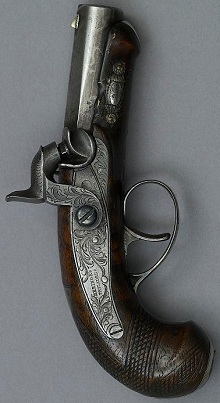 There stands Mrs. Mountchessington, played that night by Helen Muzzy, telling Harry Hawk's Asa Trenchard that he is definitely, "not used to the manners of good society," as a boor of an American transplanted into the depth of prim and proper English manners. This is Asa's moment, his opportunity to show her up.

And he definitely wants to. Asa shouts back, directly to Mountchessington's face that accusatory question. But then it all goes off the rails. Asa steps into Mrs. M's beartrap of a taunt. And it snaps around his leg.

The meaning of, "sockdologizing," doesn't matter. It's all in the setup. Asa's been accused of not knowing the manners of good society, and then proves in one line he not only doesn't know them, but doesn't know he's being judged at all.

Analyzing a joke is the best way to kill it, I know. But I'll now always laugh at that hilarious line, just like Lincoln did right before Booth eased his finger back on the trigger in April of 1865.