From a Place of Fear: Death, Slavery & Stonewall 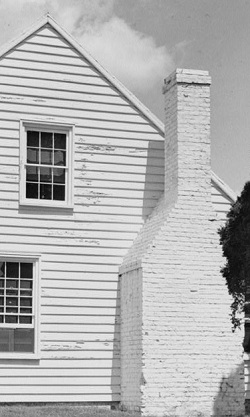 Earlier this spring, I sat in Gettysburg at the "Future of the Civil War" conference and listened to an intern talk about how he had been scared to interpret. He was afraid of his visitors, afraid to tell them about a place.

It was the "Jackson Shrine" at the Chandler plantation "Fairfield." And the one crucial fact he didn't know how to share was that Thomas Jonathan Jackson died in an office on a plantation, an office used to manage human chattel labor on the 740-acre plantation. He was afraid, intimidated, to say the simple sentence: "Before Jackson came here, this building was used to manage the plantation's over 60 slaves."

Being intimidated by the idea of interpreting is fine for a college student. It's a tough, scary world when you first start out. Intimidation is one healthy reaction. Talking about what James Loewen called, "the tough stuff of history," is tough and rightly should be. We're talking about, at its heart, a 250-year societal sin. Those types of wounds should still hurt.

But talking about our sins is the way we overcome them, make amends for them and avoid them tomorrow. We find solace in confessing and doing penance, it is a balm to the soul.

So, this afternoon, while many are thinking about Stonewall Jackson's death in a small overseer's office adjacent to a farmhouse on a Virginia plantation, I'll be thinking about other folks too.

I'll be thinking of the 60 human beings who Thomas C. Chandler owned in 1860. I'll be wondering who the 56-year-old man was, what the name of that 40-year-old woman was. Did that 4-year-old girl grow up to be a mother? A wife? Did their wounds ever heal.

By 1863, most of them were gone from the Chandlers' farm, suddenly finding freedom when a blue army descended on Fredericksburg and a new life was only a stone's throw away. They left behind small tokens underground that remind us they were there. But their journey had taken another step forward, from a place of toil and chains toward a land of freedom.

And as Stonewall Jackson lay dying in the small wood-shingled office where the man who had whipped those men and women and overseen their toil had kept his records, freedom marched forward. Because of Jackson's death in that very room, the death of slavery was just a little bit closer to being realized. His last gasp was one more last gasp on the road to destroying the peculiar institution.

Jackson's death did mean freedom, just not the kind he or the men he led ever intended.
Posted by John Rudy at 3:15 PM