Manassas: On The Road Again

A few months ago I took a quick jaunt to Carlisle to see the Pennsylvania Civil War Sesquicentennial roadshow. I was heartily impressed with the quality of interpretation and exhibit design. For a rolling exhibit which needs to fold in upon itself, it was very rich and powerful. Jared Frederick, proprietor of History Matters had a nice roundup of what that exhibit comprises.

After the great experience with Pennsylvania's traveling offering, I was excited to see what Virginia, the heart of the Civil War in the East, had to offer. That's why Michael Lynch's preemptive criticism of the exhibit actually excited me. I believe that coming close to a recovered experience, trying to see the world through a historical actor's eyes, is not only possible but the ultimate opportunity for any historical interpreter to offer their visitors.

So how did Virginia's HistoryMobile stack up to Pennsylvania's? Not very well in my estimation. The exhibit was well intentioned. But the hokey execution of the first gallery cast a long shadow on the rest of the experience. The gallery was a small, dark room. Soldiers voices pipe from the darkness, discussing the coming fight. Then battle breaks out. "Battle" consisted of about a dozen and a half red LEDs embedded in the wall blinking at random intervals. Then the underbrush caught fire and an orange wash rose from one side of the room. Then the lights came up again.

To recover experience, you need to attempt to approximate experience. At a camporee as a Boy Scout, I remember going into a fire safety RV. We sat in the bedroom as simulated smoke poured into the room, setting off a smoke detector and allowing us to safely see how dropping to the ground and crawling to a window could save our lives. The experience was a safe approximation.

A simple smoke machine and some more complex lighting might have gotten the experience just a bit closer to the real. Let the visitor start to feel fear and confusion. Let them feel the distress of a confused soldier. Make realistic muzzle flashes, and not something akin to winking owl's eyes in a carnival haunted house. The battle experience gallery was a relative failure. 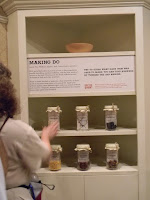 The next two galleries show white and black civilian experience in wartime. The first is a sparse parlour, the second an equally sparse slave cabin. Using just a few well chosen stories, the exhibit tries to convey the lives of these actors of the past. But where recovering personal experience is the goal of the first gallery, the next two are more akin to simple exhibitry. In addition, the space is cramped and tight, making soaking up the content along with the 9 other people exiting the battle gallery nigh impossible. Interactive computer panels lined the walls in both galleries, but the content did not differ from one screen to another. For so many different sensory inputs, there was very little information.

The final gallery featured the fates of citizens and soldiers, as the war was both an opportunity to gain and lose something. Walls of faces to flip and discover the fates of individuals was effective, if not novel. But the video in this last room was heartily disappointing. "Our search for a single meaning for all these places will always fail," the video states. In this, it is very much correct. But then it begins shoehorning:


Can a white man not feel the power of that new-found freedom? Can an immigrant not feel reverence? Can a scholar not see these places as abominations, symbols of the collapse of the human spirit? Can African-Americans not study these places for the keen excitement of their military tactics? How racist is the thought that just because you look one way or another, you automatically think of a place in a particular way? 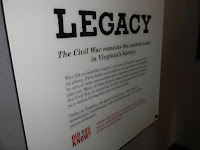 What benefit does dictating the meanings that people walk away with after encountering the Civil War in the Old Dominion provide? Wouldn't it be far more effective to offer these visitors the opportunity to draw their own personal meanings from the war? Saying to someone, "You must care about this place because of..." is one of the surest ways to alienate them. If you allow them to explore, though, they will develop their own personal meanings for a place. When they invest their own meanings in something, they keep on caring.

The video makes the blanket claim that the Civil War was, "an event long ago that remains central to Virginia's identity. What happened in our back yards, in our towns, along our rivers and in our valleys-helped launch the American nation on a path to power and greatness." The last line is cutting in its vapid simplicity: "The union once asunder, now changed, inseparable."

I know these sound like trite questions, like I am asking the exhibit to cover that which it never intended to. But then I stepped outside and watched a video on a monitor in an adjacent Virginia Civil War 150th Commission tent. Here was the conclusion that SHOULD have been in that last room in a windy, bright tent, barely visible. Covering 1865 to 2011, the video brought the Civil War full circle, showing the rough and winding path forward from the Civil War to today set to the jarring tune of Jimi Hendrix' 1969 performance of the Star-Spangled Banner at Woodstock. I tried to film it as best I could, but the video came out poorly, so I don't have anything to share. When the Virginia Civil War 150th Commission puts the video up on their site, I'll be sure to link you off to it.

Still, for a minute, just imagine what could have been possible had the organizers just let everyone draw their own conclusions from the exhibit, instead of dictating the acceptable importances of the Civil War? How many more visitors would find the place they fit within the Civil War?
Posted by John Rudy at 12:00 AM