I know I promised the second half of my series on who own's black history to you all last week. And I do still promise it to you. But time slipped through my fingers this week, and I would rather devote a few more hours to ruminating on the next installment than to go off half cocked. 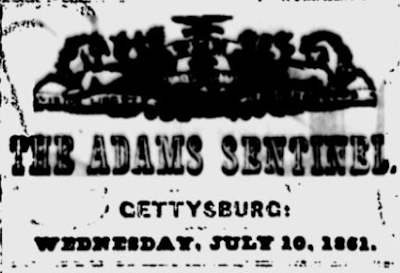 But I don't want to deprive anyone of good content this week, so I think we'll take a look back 150 years to what the men and women of Adams County were doing as the July 4th holiday was fast approaching. The Adams Sentinel of July the 10th reported:

A Paper in the Army.

On last Wednesday evening, about dusk, two printers in the army at Martinsburg proposed to get out a newspaper for the 4th. It was approved by the officers, and volunteer printers were called for. They stepped out by dozens, and at 10 o'clock a squad of fourteen entered the office of the "Virginia Republican," a bitter organ of the secessionists, the editor of which had closed the concern and joined the rebel army.- They struck a light, found plenty of paper, ink, &c. and went to work, and by morning had out their paper, "The American Union." It has in it the Declaration of Independence, and a number of patriotic songs, also an account of the advance of the army into Virginia, and other war items, with several other articles. When they entered the office, they found it littered with the evidence of treason, and standing on the press, "locked-up," ready to work, was a form containing several secession songs - one of which they give in the paper. Our townsman, SAMUEL VANDERSLOOT, Esq. was one of the Editors. Among the patriotic songs in the paper, is one written by him, as follows:

"The Union" is our watchword where'er our footsteps roam.
And with the friends of freedom we always find a home;
Our hearts are with our country, our eyes are on our flag;
And we will plant it North and South on plain or mountain crag.
CHORUS:- Then wait for the Union,
The proud sailing Union,
The imperishable Union,
And we'll all take a ride.

We've left our home and kindred, in quest of traitor hosts,
Resolved that we will bravely die, or drive them from our coasts:
Our fathers fought the mother when she raised the tyrant hand.
And we will whip the brother who wo'd scourge our happy land.
CHORUS- Then wait for the Union, &c.

Our wagons are "substantial," and our horses large and full.
We have pork and beef and crackers, just as much as they can pull;
All our men are "gay and happy" while there's aught of work to do,
And when they get into the battle they will "put the rebels through."
CHORUS- Then wait for the Union, &c.

Our cause is just and holy, our laws "must be preserved."
And in the work of fighting, we cannot be unnerved:
God bless our noble army-in them we all confide-
So jump into the Union and we'll all take a ride.
CHORUS- Then wait for the Union, &c.

Samuel J. Vandersloot, a 25 year old Gettysburg attorney, enlisted as a private the 2nd Pennsylvania Infantry Regiment on April 20th, 1861. Less than a month after he and his comrades published their paper, on the 26th of July Vandersloot was mustered from service at Harrisburg. Five days before, the Army of Northeastern Virginia had its nose bloodied at Manassas. Picnickers, keen on sightseeing and eager to witness the one great battle of the war became entangled on the roads among the retreating Federal forces. Civilian and soldier alike became prey to the advancing rebel forces, some captured and sent South to prison at Richmond. The nation realized this might be a longer war than 90 days. Vandersloot, for his part, escaped his short taste of soldier life unscathed. The unit never saw substantial action before being mustered out. 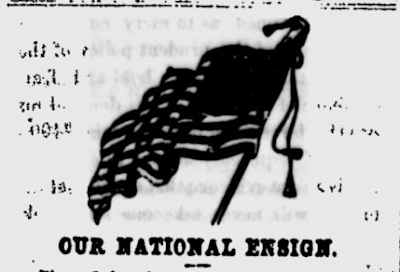 In Gettysburg on July 4th, 1861, bells rang and cannons fired to celebrate the birth of that nation a scant four score and five years before. After scenes of soldiers marching through Gettysburg's streets, uniforms sharp and crisp, the town processed in hacks and carriages to Spangler's Spring for a picnic, and, "an excellent one it was." One hundred and sixty people, the Sentinel reported, lounged on the meadow and in the shade of the trees on a quite and joyous summer holiday. War was as far as it could be from bucolic Gettysburg.
Posted by John Rudy at 12:00 AM