Unlike a few critics from the Civil War blogging community of this past Monday's History Channel presentation of Gettysburg, I watched the whole thing from beginning to end. I've since watched it again. I took mental notes; I paid keen attention.

Monday night I also watched on Twitter. I expected the experience to be very different than a couple weeks ago, when I watched with America as freedom fighters were beat to a bloody pulp for suggesting that we all might be better off if we tried to get along. Not badly different, just different. I was not disappointed.

However, the Civil War community was terribly disappointed, even before the curtain rose on the documentary. They were spoiling for its failure weeks ago, praying for the sins to shine through. Some were pointing out the "egregious historical inaccuracies" of uniform bits and bobs, like a hat pinned incorrectly or a rifle musket at full cock were cardinal sins worthy of crucifixion. Others, like those on the Gettysburg Discussion Group, of which I am a loyal reader, bemoaned the film before seeing a lick of the actual production. Questions were raised as to the weight of the scholars who had been consulted, as no one had heard from anyone who had been interviewed for the film.

Was some of this criticism leveled at the documentary simply because it was gritty and raw? It certainly tried to show the horror of war threadbare. Michael Lynch pointed out his distaste for, "the gritty, modern war approach to filming the reenacted sequences." The film was dirty and bloody. It depicted war unvarnished. Is that the source of some of the academic and amateur historical community's kneejerk reaction to the piece? Is it too firmly wiping away the ancient myth that the Civil War was a dignified affair, replacing the notion with one of murderous chaos and unromantic rage? "The combination of nineteenth-century gear and modern-day combat camera work was a little too jarring." Might it have been jarring because we don't like to think of the Civil War as analogous to the bloody messes of modern combat, but instead as a land of sterile red and blue boxes moving across sterile maps.

Some folks within the Civil War diehard community understand that the documentary wasn't targeted at them. Take a look at the astute observations of Andrew Mills on the GDG:

"...At the end of the day, I don’t think anyone watching the Gettysburg show on the history channel will remember what side the Hardee hats were pinned on, and the insignia of the infantry's hats. But if the show gets people interested in the events and causes people to want to learn more about the event by visiting the location, reading books, joining discussion groups, isn’t that more important than the finite details of a 'cocked rifle on a marching infantry man?'"

So, we start coming down to the questions this documentary raises - Do we need to cover the whole of the battle to make something about Gettysburg? Is it such an egregious error to make a Gettysburg documentary and not mention Chamberlain? Were Hardee hats and crossed rifles important?

Most important are these two - Did the target audience 'get it'? and Who owns Gettysburg?

So, did they? Lets turn to Monday night, as America gave its live feedback to History. The hashtag was #gettysburg on Twitter. Many comments were made by diehards and hardcores that hats were wrong. Twitter was flooded with "Ughs!" over little details.

You're going to wonder where I'm going with this, but hang tight. I watch Doctor Who and am a rabid fan. One forum I frequent about the British Sci-fi series is Gallifrey Base, where as soon as the show hits the airwaves across the pond, the boards light up with commentary. But we're all weirdly obsessive fans who disect episodes and know the show's canon by heart. Every week, though, there is a thread asking what the 'Not We' thought of the show. The fixation on what the non-fans, the non-Doctor-Who-experts, the normal folks think of the episode is crucial, for poor ratings will ensure our beloved alien doctor never plies the airwaves of the BBC again.

So, what did the 'Not We' think? What did the casual, non-Civil-War-obsessed viewers of the Gettysburg documentary think? Did it hit its mark? [1]

Aaron Jones (@aarontjones) noted that his, "9 yr old [son] Gabe is taking notes watching #Gettysburg on #History Channel. I was just yelled at when I flipped chnls during commercials."

Patricia Diaz Swedin (@patriciaswedin) noted after the first hour of the show that her, "ten-year old is up past bedtime, at the edge of his seat. GOOD job #HistoryChannel."

The enthusiasm that the documentary instilled in many is simply amazing. Adam Zenore (@zen1mada) exclaimed that, "This Gettysburg special is pretty fucking sweet! Not much of a Civil War Buff... but I may start having to be."

Russell Mcintyre (@russellmc03) commented that, "if History classes made students watch documentaries like "Gettysburg" I would add a History major this second. #nerdalert #somuchkilling"

Meanwhile, Rick Sheridan (@ricksheridan) acknowledged he is, "not a Civil War fanatic," but the battle, "was such a monumental event it beckons the casual historian like me."

User @obscureathletes, a sports fan, scolded their followers: "If you're watching sports this evening instead of Gettysburg on the History Channel, then what the hell is wrong with you?"

Finally, a user named Marco (@SAGonzo_) summed up the difference between this documentary and many others. "This documentary is showing me more I never knew about and making it very human!"

Whose right is it to decide what stays and what goes in an 87 minute production on the battle? Or an hour long battlefield tour? Or a three hour guided driving tour? Should we suit our offerings to our audience, or simply open up a firehose and tell them to drink its fetid, fast-moving and uninteresting water?

Obviously, you can't cram three days of battle, over 55 continuous hours of fighting and posturing, into an hour or two. It is impossible to be comprehensive in such a short time-frame. So, you can choose two options. The first choice is to try to be comprehensive and doom yourself to fail abysmally at imparting any of the importance of the story. Think of this as a sort of reverse of the old adage: 'you fail to see the trees for the forest.'

Or you can acknowledge your inability to be comprehensive from the outset and focus down on a few key trees, helping your audience to appreciate them and, through that appreciation, the whole forest. Brooks Simpson thinks the writers, director and producers were scatterbrained in their organizational structure. I'll not deny this disjointedness. However, I don't see it as a bad thing. The tale woven on Monday night was admitted from the get-go to be non-comprehensive. The first lines of the documentary are as follows:

The same passion that built our nation now tears it apart. A minor skirmish that starts by accident explodes into the deadliest battle every fought on U.S. soil. Two American armies face off in a small Pennsylvania farm town. Soon 50,000 will be dead, wounded or missing. This is the story of eight men who fight here and three days that change America forever.

The ring of this prologue is very similar in my ear to the beginning of Quantum Leap, explaining the premise of the story wholly. We aren't looking at Samuel Beckett's whole life on Quantum Leap, just snapshots that help us to understand the whole. Likewise, we're not seeing the whole battle of Gettysburg in the documentary, but viewing it from eight moments in time experienced by eight men on that battlefield.

So, if you can't be comprehensive, the best course of action is to instill appreciation through the description of a part of the whole. And in crafting that description, include only the important details and few extraneous guns that won't 'go off' by the third act.

So who should 'own' Gettysburg and its stories? Should the subject be the pantheon of the dedicated military historians and hobbyists, as it was intended to be when the war department set aside a national park solely for use as a military laboratory to study the minutiae of tactics in 1895? Or can it be an intellectual landscape that everyone owns, experts and novices alike? Just because a documentary is tailored to a novice audience, does that make it bad? 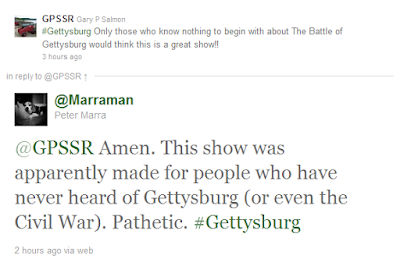 Two Twitter users, firmly members of the 'We', summed up their answer to that question. Gary P. Salmon (@GPSSR) posted that, "Only those who know nothing to begin with about The Battle of Gettysburg would think this is a great show!!" Peter Marra (@Marraman) replied: "@GPSSR Amen. This show was apparently made for people who have never heard of Gettysburg (or even the Civil War). Pathetic. #Gettysburg"

So what if it was, Peter? So what?


[EDIT: Michael Lynch posted some interesting comments about the documentary in response to this post. They're well worth a look.]
Posted by John Rudy at 1:15 AM