And With The Sound The Carols Drowned:
Captives in Bleak December 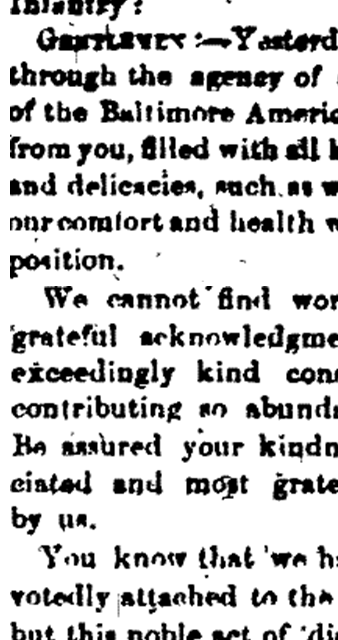 Christmas was coming, and a knot of officers of the 87th Pennsylvania suddenly found their December a bit brighter. Nine boxes had been sent along to the officers, packed to the brim with, "all kinds of necessaries and delicacies, such as will be conducive to our comfort and health while in our present condition." And the soldiers were pleased.

Any soldier would be pleased to have a pair of warm socks, a stack of stationary or a can of preserved vegetables from home. But these men were doubly pleased.

The letter of gratitude they wrote to the Gettysburg Compiler was mailed from Libby Prison in Richmond.

Having to celebrate the grand winter holiday in the field far from home is bad enough. The uncertainty of war is enough to make the holidays, a time for family and celebration, morose. But imagine being behind enemy lines, a military prisoner behind bars in a strange land. The future is not just uncertain, it's only as bright as the dank corners of your cell.

The folks behind the care package weren’t the typical crowd, either. Most of the letters gushing over socks and packages of delicacies that Gettysburg's papers printed lauded the kind men and women of Adams County. But these nine boxes came from the soldiers of the 87th Pennsylvania, entrusted to an agent of a Baltimore newspaper and carted into the very lion's den. These weren't citizens helping their men, their sons and fathers. These were soldiers helping soldiers, enlisted men supporting their captive officers behind enemy lines.

One of those boxes was cracked open by James Hersh. Hersh had been quartermaster of Company I back in June when the world went crossways. He and a cluster of the men of the 87th Pennsylvania were captured near Winchester, some of the first soldiers scooped up as Lee's army poured north on a quest that would lead it to Adams County. While Lee headed north, Hersh and his compatriots were shipped south to Richmond and captivity.

His mother and father were still in New Oxford on Adams County's eastern edge. Undoubtedly, the aged couple worried about their soldier. Hersh was only in his late 20s. He still lived at home. He was just a farmer. He deserved to be at home with his family during the cold winter months when families gather and feast. While men and women in Adams County joyously sang and greeted each other warmly, Hersh was in a musty cell.

Hersh and his comrades didn't list everything that was in their care package. But certainly, whatever was packed with care in those crates strengthened and bolstered them for the long Virginia winter nights ahead.

Hersh, thankfully, would be home by the next December 25th, when Americans again would light candles, sing ancient songs and hold each other close in the encroaching icy darkness. His war was finally over, a fact worth celebrating with carols and mirth.
Posted by John Rudy at 12:30 AM