This past weekend, I let my two hobbies combine. I spend a good chunk of my spare time doing incessant, weird and wild historical research. If you've read along on the blog for any appreciable time, you know the odd corners I've turned finding peculiar ans striking stories both here in Gettysburg and beyond.

But I have another hobby.

I am an Adult Fan of LEGO. If you spend any amount of appreciable time with me in person, you more than likely already know this too. Like HO or N scale railroaders or the folks who glue together Revell models of World War II airplanes, I obsess over tiny, realistic details rendered in a tiny artistic medium originally intended for children.

The community is chock full of geeks: engineers, computer programmers, IT professionals and (at least around DC) military wonks. I'm a lone wolf in our community. I'm an historian.

Military building has become increasingly popular over the past decade, with aftermarket parts (produced by companies like Brickarms) becoming ubiquitous, intricate plastic Panzer tanks have been rolling across bumpy plastic landscapes. Personally, I'm a purist, choosing to build only with parts produced by the LEGO company.

My good friend and fellow builder Gary proposed a wild idea: build Civil War dioramas in LEGO and display them at the Brickfair LEGO convention.

Sometimes the displays of World War II violence at LEGO conventions bother me. Particularly, these displays seem to forget that war is a real thing. They are "drenched" in transparent-red LEGO pieces representing gallons of blood. Toy men are dismembered, tiny plastic arms posed flying through the air away from tiny plastic bodies.

But depicting war in a medium like LEGO was a fascinating prospect for me. Illustrating artistic impressions of war within an artistic medium that is principally a children's toy adds an amazingly deep layer to the possible meanings. Choosing to tell the story of this destructive war which has, at its heart, the violent ever-present American struggle over race through a toy that has one race (yellow) and perpetual smiles makes you ask, on some level, what are we teaching our children by presenting them toys with such unabashed violence? Will children mimic violence in their real life when their imagination is fed with glorious violence in toys, cartoons and other media? 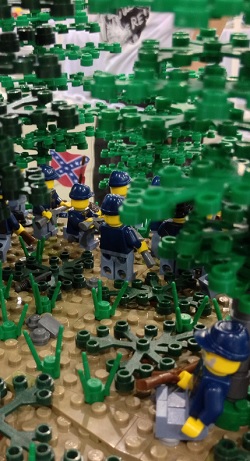 So the challenge was to tell the story of the 150th anniversary of the Battle of Gettysburg (because it is 2013 after all) with a toy and do it both respectfully and meaningfully.

I think it happened. Our vignettes filled out the tale of the entire battle. We had the requisite amount of tiny plastic men charging across fields and up ridges. Gary built an amazing vignette where a LEGO Joshua Chamberlain defended a LEGO Little Round Top from a LEGO William C. Oates. There were a few wounded men scattered about, but no transparent-red pieces, not cartoon blood exploding out of figures' backs as artillery rounds passed through tiny plastic chest cavities. And Gary's attempt to show the struggle of war without glorifying the flowing blood paid off: participants voted it best historical themed model in the show.

My entries in our collaborative build were bent toward taking the story beyond the battlefield. A model of the Evergreen Cemetery Gatehouse told the tale of Tillie Pierce's fears returning home. Tiny LEGO figures with brown skin exhumed the body of a dead Federal soldier, Basil Biggs standing by and making sure his crew did the job right. Federal soldiers retreated through the streets of Gettysburg, careening past the Fahnestock Brothers' store.

So did it work? Were people looking at our display and thinking about war, or were they simply glorying in its mass orgasmic bloodfest?

As I sat at the table during the public days, hundreds of cameras snapped photos of Gary's Little Round Top and my model of the Lutheran Theological Seminary. They certainly were popular.

But I think people could see the difference. I think our lack of toy blood, our respect and our depiction of real, sorrowful violence started gears turning. Nothing tells me that more that it was working than one overheard conversation. Two kids, both about 7 years-old or so, stopped in from of Little Round Top. One was craning his neck to see the figures and the battle between the tiny LEGO trees.

He seemed upset and said to his friend, "Why don't any of these figs have just a smiley face?"

The other 7 year-old answered quickly, almost as if the answer should be brutally obvious to his friend: "Why would they? They're fighting. They're dying. That's not fun."

No, war is not fun. War has a true cost.

And maybe, just maybe, that cost can be respectfully rendered in my favorite artistic medium.
Posted by John Rudy at 12:30 AM