Living Fortress of the Heart: Resonance of Emancipation

Jacob dragged me somewhere again. I really should learn to say, "no," because no matter where I get dragged by Jake, it always ends up wrecking my brain for months and making me obsess about some amazingly minute interpretive experience. But I'm a glutton for interpretive punishment.

Last year during the National Association for Interpretation annual workshop it was an historic diner. This year, with the conference being held in Hampton, Virginia, there are far more Civil War related speed bumps to roll over.

Yesterday it was the Emancipation Oak. "It'll be amazing," Jake assured me, "It's a living thing that's a National Historic Landmark."

I made a snide remark about, "living history," and joined him in the car along with Clayton and Travis, two more whip-crack interpreters.

The tree is on the campus of Hampton University and is massive. It's an impressive Southern Live Oak, an evergreen tree that seems to envelop the sky with it's sheer mass.

Under the tree 150 years ago, former slaves sat in rapt attention as the words of the Emancipation Proclamation were read aloud to them for the first time. Lincoln exclaimed in neat strokes of ink upon a page, translated into living words for the contraband gathered at the foot of the tree, that the slaves of the Southern states in rebellion, "henceforward shall be free; and that the Executive government of the United States, including the military and naval authorities thereof, will recognize and maintain the freedom of said persons."

These poor shards of humanity, shivering in the shade of a even-then sprawling tree, saw new light as Lincoln took a massive step toward their freedom and equality. The fort that loomed on the horizon, the bastion of freedom named after James Monroe, now stood explicitly as a bastion to protect their freedom from the slave power.

OK, so Jake was right. It was worth the stop.

But then we went on another wild goose chase. "Now we're going to see the Hampton National Cemetery!" Jake declared. Into the car we piled again. After discovering there are two Hampton National Cemeteries, and that we had arrived at the wrong one, we hightailed it over to the correct one, again within the campus of the historically-black Hampton University. Four white boys in an SUV were waived past an incredulous security guard. She was sure we weren't going to cause trouble, but it was an odd sight at sundown.

We wanted to find someone, and had our sights set on a few USCT soldiers. Travis produced his phone and listed off the names of some Medal of Honor winners resting within the cemetery's brick walls.

We hunted down the grave of Color-Sergent Alfred B. Hilton. Hilton served in Company H of the 4th United States Colored Troops. He enlisted in August of 1863 at Baltimore. He listed his residence as Harford County, Maryland. He was married and in his twenties. He was 5 foot, 10 and a half inches tall. His complexion was black.

Standing over the sod beneath which lay Color-Sergeant Hilton, we read a quick biography of his heroic act. Our glowing screens told the tale in the growing darkness.

In late September of 1864, as the 4th USCT charged the rebel works during the Battle of Chaffin's Farm outside Richmond, the Color-Sergeant carrying the Regiment's flag was struck down by a bullet. Standing next to him was Sergeant Hilton, the United States flag tight in his grip. As his comrade fell, Hilton grabbed for the flag and, according to the Official Records, "struggled forward with both colors, until disabled by a severe wound at the enemy's inner line of abatis." Hilton urged his fellow soldier onward, passing the flags on to another man, "his thoughts were for the colors and not for himself." 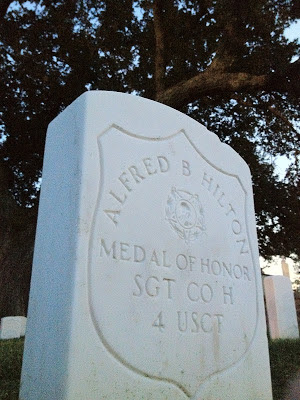 Hilton, bleeding from a severe wound in his right leg, was brought to the United States Hospital at Fortress Monroe. His leg was amputated at the knee.

A package was returned to his company commander in the field from the hospital. Inside were simple things: a cap that had sheltered his head from rain or sun as he marched forward for freedom, a wallet with $4.50 worth of paper money, and two ambrotypes. Who were the faces in those pictures? Were they his wife? Was one a photo of him, waiting for a spare moment to send it home to loving hands waiting for a warm embrace that would never come?

I looked up from the gravestone, a tear staining my right cheek. I swear it was from the cold. A tree caught my eye. Its leaves looked familiar. Behind Hilton's grave, shading his final resting place, is a Southern Live Oak. The branches don't spread as wide as the Emancipation Oak, but they're still strong.

Color-Sergeant Hilton rests now, forever a free man under the shade of a cousin of the tree of first freedom, a stone's throw away from Freedom's Fortress.

He is the Civil War in microcosm more than any other man.

I'm glad I got the chance to meet him.