"...of shadow and substance, of things and ideas": Finding Inspiration in The Twilight Zone

"Tonight's story on The Twilight Zone is somewhat unique, and calls for a different kind of introduction. This, as you may recognize, is a map of the United States..."

Of all of the consummate storytellers of the 20th century, no other holds a candle to Rod Serling. In a half-hour, Serling and his corps of writers, directors and actors could weave a small tale into an epic. Serling could strike at the heart of the human soul. He could incisively cut to the core of social and political quandaries, injecting deep meaning through simple stories and fantastic everyday occurrences.

But Serling interpreted. His stories were not dictatorial. They were moments for the viewer to undertake introspection, to investigate the meanings of something and find themselves within the story. One of the oft repeated quotes from The Twilight Zone, "submitted for your approval," which Serling used at least three times in his opening narrations over the course of the series, leaves the viewer with the final say whether they will incorporate the lessons learned into their personal lexicon.

No place does this demand on Serling's part that the audience try to find themselves within the tale sound more clearly than in the closing narration for Serling's episodes "The Shelter" (1963) and "The Monsters Are Due On Maple Street" (1960). Both episodes follow a similar theme. In "The Shelter," a CONELRAD warning of imminent nuclear war turns a group of neighbors into utter monsters as they desperately claw and batter at the door of one of their fellow's fallout shelter. Serling intones as the star field appears at the episode's end:

No moral, no message, no prophetic tract, just a simple statement of fact: for civilization to survive, the human race has to remain civilized. Tonight's very small exercise in logic from the Twilight Zone.

Likewise, in "The Monsters Are Due On Maple Street," when the lights mysteriously are doused on a suburban street, paranoia reigns. Eventually, the residents of Maple Street turn on one another, leading to rioting and an accidental murder. As the episode ends, Serling sums up the scene for the audience:

The tools of conquest do not necessarily come with bombs and explosions and fallout. There are weapons that are simply thoughts, attitudes, prejudices, to be found only in the minds of men. For the record, prejudices can kill and suspicion can destroy, and a thoughtless, frightened search for a scapegoat has a fallout all of its own - for the children, and the children yet unborn. And the pity of it is that these things cannot be confined to the Twilight Zone.

In both cases, Rod Serling ingeniously implies the unasked question, "are you capable of such horrors?" He begs the audience to think about whether they can see themselves within the story.

In a 1959 interview with Mike Wallace on ABC television, Rod Serling claimed that he was entering the science-fiction arena because he was weary of the fight to tell real, meaningful stories in the face of the censor. "I'm just acting the role of a tired non-conformist," he told Wallace, "and I don't want to fight any more." Serling had resolved that he didn't, "want to have to compromise all the time, which in essence is what the television writer does if he wants to put on controversial things."

Instead, he would undertake The Twilight Zone, he explained to Wallace, "a half-hour show, which cannot probe like a [Playhouse] 90, which doesn't use scripts as vehicles of social criticism." Serling went on to claim that, "because they deal in the areas of fantasy and imagination and science fiction and all of those things, there's no opportunity to cop a plea or chop an axe or anything."

But what Serling was doing was not dropping his keen eye for social criticism. Instead, he was finding a way to talk about the pressing social issues of the day in a way that would resonate with the audience while still eeking by the censors. With aliens, ventriloquist dummies and robots as villains instead of racists, bigots and warmongers, Serling could start to approach the most important questions facing America in the early 1960s. He encouraged his audiences to find themselves and their society within his stories, and through that helped to push forward America's progress.

"I think it's criminal," Serling told Wallace in 1959, "that we're not permitted to make dramatic note of social evils as they exist, of controversial themes as they are inherent in our society." Serling just found another way to make his world better. He interpreted to the audience of the present, helping them find deep modern meaning in the fantastic and unbelievable. 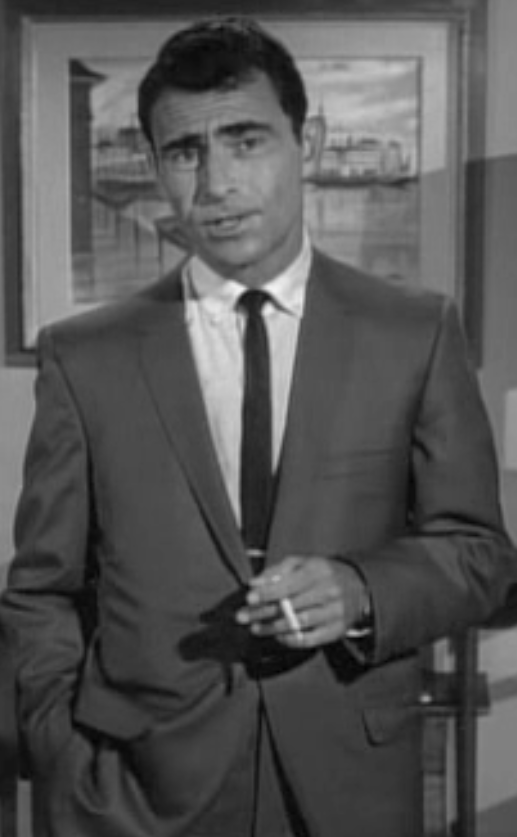 And what's more fantastic and unbelievable than the world of the past? Can't we help everyone find themselves within that world too?

The Twilight Zone is a bottomless well of inspiration for the interpreter. Be assured, I'll be dipping the bucket in that well often over the next year or so. Rod Serling was perhaps the greatest interpreter of the 20th century, because he knew not simply how to weave a tapestry but to help each member of his audience find their thread within that grand loom-work. What can we learn from him? Well, after all...

...the threads of history are woven tightly and the skein of events cannot be undone, but on the other hand, there are small fragments of tapestry that can be altered. Tonight's thesis to be taken as you will, in the Twilight Zone.