Last Prisoners at Gettysburg: A Gift for Kind Hearts

I have been digging quite heavily into the history of Pennsylvania (Gettysburg) College and the American Civil War these past few months, trying to fill a gaping hole in the scholarship not only of the college but of the local civilian story in the war. This has meant long Thursday nights at Adams County Historical Society culling through every random mention of the college and the complex relationship which the students and faculty had with both the citizens of the borough and the armies which invaded it. It has also meant that I've had the opportunity to revisit Gettysburg College's Special Collections in-depth for the first time since I began working with the college's Civil War history in 2006.

It continually surprises me how little has been unearthed from archives and newspapers on any topic I research. How any historian can 'discover' a source which was published in a newspaper in 1863 and has been sitting on a roll of microfilm for 20 years, or how they can discover a source which comprises part of the official record of an institution spanning more than 175 years of history and sitting in that institution's archive for over a century is a mind-boggling concept. Historical research is one never-ending instances of the thing you need being hidden in plain sight.

So, what did I find hidden in plain sight the other night in Gettysburg College's Special Collections?

The finding aid listed the following in the files of the Board of Trustees from 1864:


1 May 1864 - Letter to members of the Lenean [sic] Association, presenting them with two globes bought in Murfreesboro, TN from the sale of confiscated property of a professor

That date, that description of the content... it was just too tantalizing. My 'discovery' of the document was, in fact, exhilarating. 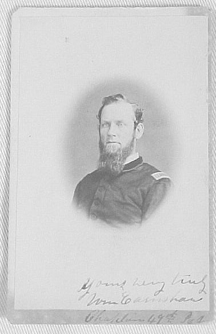 In May of 1864, the college received a letter and (presumably) a crate containing two globes. William Earnshaw, formerly a Methodist Episcopal Minister from Shippensburg, Pennsylvania, had forwarded the geographic instruments to Pennsylvania College with his regards. Before the war, Earnshaw was a circuit riding minister and for a time was based in Gettysburg. As the war broke out, Earnshaw volunteered his services to the state of Pennsylvania. By the spring of 1863, he had resigned his commission as chaplain in the 49th Pennsylvania Volunteer Infantry and volunteered for duty as a hospital chaplain. He was eventually attached to the Army of the Cumberland, and would spend the balance of the war in central Tennessee.

Earnshaw's globes were, "purchased at the sale of confiscated property in," Murfreesboro. The provenance of the globe was sketchy at the auction, Earnshaw admitted, but he relayed to the college that, "so far as I can learn they belonged to Professor Henderson formerly of the 'Union University.'” The previous owner of the hemispheres, "at the Commencement of the Rebellion," had given, "all his force against the dear old flag."

The globes immediately reminded the minister of the small college in the town in south-central Pennsylvania where he had made his home for a short time. "And remembering the kindness of the able President of the Penna. College, and many pleasant associations with the Professors + Students," Earnshaw explained, "I felt and now feel great pleasure in commiting [sic] to the care of your noble society," the globes.

Earnshaw was present at Gettysburg during the battle and hospital period, nursing the wounded and ministering to soldiers' destroyed bodies and souls alike. The "kindness of the able President," could refer to Henry L. Baugher's care of over a dozen wounded Federal soldiers in his home over the course of the three-day battle. The, "pleasant associations with the Professors," could refer to the amiable Martin Luther Stoever and his penchant for inviting any wayward soul wandering the streets of the town after the battle into his parlour for tea. If he did in fact set foot inside the hallowed walls of the college, he witnessed how the halls of the, "noble," Linnaean Society had been soaked with the blood of hundreds of wounded soldiers dashed to pieces by three days of carnage.

In Tennessee, Earnshaw experienced a new sort of carnage: reinterment of mangled men. As the war drew to a close, he was put in charge of the military cemeteries at Stones River and Nashville, later to be placed in charge of the cemeteries at Fort Donelson, Shiloh, Corinth and Memphis as well. Frank Conover explained in his Centennial Portrait and Biographical Record of the City of Dayton and of Montgomery County, Ohio in 1897 that, "in the presence of thousands of unreconstructed rebels, and of women and children who were imbued with the idea that secession was just and the northern soldiers usurpers, this duty was most arduous." Earnshaw, assisted by the men of the 111th United States Colored Troops, "in the face of insult and intimidation and personal danger," helped to find a final resting place for, "the bodies of 22,000 fallen Union soldiers... gathered from their shallow, temporary graves." Earnshaw reported to the War Department in 1866 that all of his, "assistants were brave soldiers who had served throughout the war." He cherished the thought that as long as he lived he would, "remember how tenderly they performed this work amid untold difficulties; how cheerfully they set out on long and toilsome journeys through rain and storm in search of their fallen comrades, and the proud satisfaction expressed by them when the precious remains were laid in the new made grave."

After traveling far from the thick of the horror that was Gettysburg and plunging into a far more sinister landscape of rotting patriots, fresh-dug graves and racial strife, Earnshaw still thought fondly of that Lutheran college which sat on the border between heaven and hell for the entire summer of 1863. The two tokens of his esteem, everyday educational objects like those in colleges and classrooms across the United States, were laden with meaning. Where the globes are today I know not. They most likely drifted to an antique collector's shelf or a landfill's depths long ago, their story mute to the world. But to think of the meaning embedded in the simple act of spinning a globe, the meaning of the simple motion of a student running their fingers across its surface to find a far away land, is tantalizing. In 1864 those globes ended up sitting on a shelf in the Linnaean Hall at Pennsylvania College, expatriates held in a foreign land, the last prisoners of war lodged in buildings which had held so many destroyed sons of the South.
Posted by John Rudy at 12:00 AM