The Civil War Centennial: Inspiration for the Civil Rights Movement?

I read Richard Williams' Old Virginia Blog, not because I agree with what he has to say but explicitly because it gets me so corking mad. Interspersed with tea party rants and modern political diatribes, Williams is an interesting (and sometimes frightening) voice of modern Confederatism and Southern exceptionalism.

His recent post on the North South Trader Magazine's editorial got me thinking. He cherry picked quotes from that publication's missive. At first, it appears he is (thankfully) just avoiding a dry list of films from the 1960s. But Williams curiously leaves a tantalizing paragraph out from his quotation of Stephen Silva's editorial. I include it here:

"As a matter of fact, nothing could have been more educational and influential than the positive effect the Centennial had on the American consciousness. I believe it is that awareness that helped the average American become sensitive to the civil rights issues of the early 1960s. Our national immersion in portrayals of the past made the inequalities of the 1960s that much more evident. I believe the Centennial “celebration” is directly responsible for creating an atmosphere of awareness and embarrassment that made the Civil Rights Movement acceptable to the average white American. For anyone to dismiss the Centennial as a series of jubilant mock-battle funfests does a grave disservice to truth." (emphasis added)

I'm not sure why Mr. Williams left out this paragraph. I would hope it is because he sees the very tenuous ground that Silva is standing upon.  Nonetheless, I am not here to criticize Williams, but instead Silva's conception that the Civil Rights Movement of the 1960s drew its motivation from the Civil War Centennial activities. Not to put too fine a point on it, I think this is horse hockey, plain and simple.

The Civil Rights Movement did raise as one of its central banners the image of a Civil War promise unfulfilled. No better example of this exists than King's mislabeled "I Have A Dream" speech. Too often we glance over the first portion of King's remarks. "Five score years ago," King begins, "a great American, in whose symbolic shadow we stand today, signed the Emancipation Proclamation." King explains that he and his fellow have come to Washington in August of 1963 to, "cash a check. When the architects of our republic wrote the magnificent words of the Constitution and the Declaration of Independence, they were signing a promissory note to which every American was to fall heir." Lincoln reinforced that promissory note with his affirmation at Gettysburg, "that all men, yes, black men as well as white men, would be guaranteed the unalienable rights of life, liberty, and the pursuit of happiness." But America in 1963 was not a place where that check might be cashed. "America," King explains to his well-knowing audience, "has given the Negro people a bad check, a check which has come back marked 'insufficient funds.'"

But 1963, the heart of the Centennial celebration, the presumed inspiration for white and black cooperation during the Civil Rights Movement, beget another bold stand on a set of steps a few months earlier. George Wallace, Governor of Alabama, stood on the steps of the University of Alabama's Foster Auditorium and denied entry to black students seeking an education. When Kennedy federalized the Alabama National Guard and forced the school's integration, Wallace declared that the, "unwelcomed, unwanted, unwarranted and force-induced intrusion upon the campus of the University of Alabama today of the might of the Central Government offers frightful example of the oppression of the rights, privileges and sovereignty of this State by officers of the Federal Government."

Just a few weeks later, in Pennsylvania, Wallace would make another strong appearance. I am not going to steal Jake's thunder (he has promised me he will share the story at a later date) but, suffice it to say, Wallace utilizes the hysteria and the latent racist sentiment among the Confederate reenactors at Gettysburg to his distinct advantage, nearly inciting a secession rally in Pitzer's Woods. 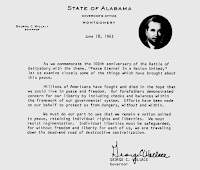 Wallace wrote a letter to the Editor of the Gettysburg Times in late June of 1963, just a week after his stunt in Alabama. It was published in the paper's battle centennial edition. Wallace praised the, "checks and balances within the framework of our governmental system," for which, he emphasized, "millions of Americans have fought and died." Wallace urged his readers to, "resist regimentation." In direct reaction to the Civil Rights standoff of the previous week, Wallace employed the Civil War centennial as a soapbox for hatred and not as an inspiration to change. The sacrifices of the war's dead demanded that America not travel down the Civil Rights movement's "dead-end road of destructive centralization." Just a few days after Wallace appeared in Gettysburg for the centennial, the Times ran an AP article with the headline, "Wallace Sees U.S. On Brink Of Civil War," wherein Wallace threatened that if Kennedy continued trying to support the Civil Rights struggle, he should withdraw American troops from Vietnam for their use in the American South.


That fall, at the centennial of the dedication of the National Cemetery, General Eisenhower spoke of Lincoln's address. He noted that, "as here we sense his deep dedication to freedom, our own dedication takes added strength." But was this a rededication to Lincoln's, "new birth of freedom?" No. Instead, it was a celebration of common suffering, as Eisenhower spoke of the, "ancient drums of Gettysburg, throbbing mutual defiance from the battle lines of the blue and the gray...summon[ing] a people, happily united in peace, to fulfill... a noble destiny."

After Eisenhower sat, E. Washington Rhodes, president of the National Newspaper Editor's Association, rose to speak. The black newspaper editor chastised the crowd, "One hundred years after the Battle of Gettysburg, 100 years after the Gettysburg Address, the anguished expectations and hopes of Abraham Lincoln for a united nation remain unrealized, unfulfilled in American life. The present, grave Civil Rights struggle attest to this melancholy, tragic fact." America's black community clearly took deep inspiration from the Civil War and its attendant new birth of freedom. Rhodes urged the audience, "with all the vigor at I command and the great esteem which I have for my beloved country, I am respectfully urging my fellowmen to take note that this is as true today as it was centuries ago – a house divided against itself cannot stand."

So did the centennial of the Civil War inspire the Civil Rights movement? Definitely. King and Rhodes show that quite handily. But was it the reenactments and John Wayne's movies which inspired a white audience to come to the aid of the Civil Rights movement? Or was the Centennial instead a rallying point for a white community desperately making a last ditch effort to hold the line of status quo (typified by the active and aggressive advocacy of George Wallace)? I think I know where I land in that debate.

The Civil Rights movement have the lily white Centennial commemorations to thank for its success? Gimme a break...
Posted by John Rudy at 12:00 AM