"I grow so weary of the sound of screams": The Real Ghosts of Gettysburg

Down on Baltimore Street, in the front yard of the sprawling complex that calls itself the "Farnsworth House," a tombstone used to sit. It was greyish-white, tall and arched at the top. In front of the marker, the dirt sat freshly turned, a single rose marking the grave. On the stone's face was the motif of a cherub. And under the wings were inscribed, "In Memory of Benajah Edwards who Departed this Life July 2 1863."

Below, as a sort of epitaph, read the words, "Ghost Story Tickets in Bookstore."

The plywood of the mock-grave eventually weathered and was removed. The Bookstore closed to make way for a seance parlour, another cashgrab expansion to enlarge what (mocking Lincoln's immortal words) the proprietors call "Gettysburg's Haunted Address."


-----
My favorite holiday is Halloween. When I was growing up, it meant so many things. First, it meant the chance to wear odd and wonderful costumes to school. Mummies, vampires, ghosts, Frankenstein's monster. Second, it meant the joyous time of sparkling snow was arriving. No matter what the weeks before had been like, Halloween was a guaranteed snowfall in Upstate New York. It was like clockwork.

As I grew older, the fantasy of Halloween took strong hold of who I am. I found Tim Burton. I found the Nightmare Before Christmas and Disney's Haunted Mansion. I found ways to stretch that morbid but jocular holiday out longer and longer. One year in High School, in the week leading up to Christmas break I dressed up each day as the litany of characters from Dickens' Christmas Carol, sporting a top hat for a miserly scrooge, a lighted candle atop my head for the Ghost of Christmas Past and rattling (plastic) chains through the halls as Jacob Marley.

I love the morbid and the dark. I love the twisted fantasy world of Halloween.

But that one word is crucial: fantasy

Halloween is the holiday of the wry smile, more so than any other. We walk into a haunted house ready to meet "ghosts" and "zombies" who are really just local kids looking for some pocket money in a part time job. The Hitchhiking Ghosts that Disney conjures are metal armatures, pneumatic cams and rubber masks. They make us smile and laugh and scream, but we know what's underneath it all. Halloween is a fiction we all pretend is real for a moment for a good time.

I haven't felt too "Halloween" in the past half-decade or so. That warm feeling and my love of the holiday has receded. Most of that I think I can attribute to living to Gettysburg. This community now so often uses the names, faces and experiences of the dead as a cruel joke that the novelty of the Halloween spirit now chafes.

No place in America has the morbid become the jocund so universally than in Gettysburg. I've spoken a bit about why this might be and what we can learn from it in the past. But the reason and the lesson don't change the raw feeling that the product produces in my soul.

That fake tombstone in front of the Farnsworth House really set off a bomb in my consciousness. And now, even though the piece of garbage has been removed from the front lawn, the scar still remains on my heart every single time I walk past the Farnsworth House. Benajah Edwards didn't exist. But plenty of other men did. My Great-great Grand Uncle died at Gettysburg on July 2nd and has no grave. Every time I think of that tombstone, I think of him and the others whose names and resting places have been lost to all eternity. 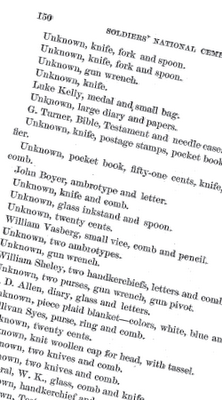 You can conjure them far more easily than the charlatans down on Steinweir Avenue ever dreamt. Just list the contents of their pockets. Before being lovingly placed in the ground of the Soldiers' National Cemetery, the pockets of the dead were emptied. Some of the trinkets held clues to the identities of the men. Some yielded nothing more than silence. The contents were catalogued and kept, according to the 1867 report on the cemetery, "in the possession of the Cemetery Association at Gettysburg, Penn'a." Where those carefully guarded momentos are now, I have never been able to track down. Their whereabouts have disappeared just like the names of many of their original owners. Still, the tantalizing list remains.

One unknown soldier, whose name disappeared when a bullet or piece of shell drove itself coldly into his body, was wearing two rings and carried a small book cut of wood. Another carried a spoon and a glass inkstand, no more letters arriving at home penned with it's dark contents. A soldier was lain unknown in the cold ground at Gettysburg, the only clue to his identity a testament, written in German and inscribed to him from Catherine Detaupafer. Another held in his pocket a letter from Carrisa Smith. Would Catherine or Carrisa ever learn the fate of the two men?

A young man lay dead on these fields nearly 150 years ago. In his pocket sat an ambrotype of a young woman and a letter. He was real. He was not a fantasy. When that young woman cried, the tears were real. When he bled, the blood was real.